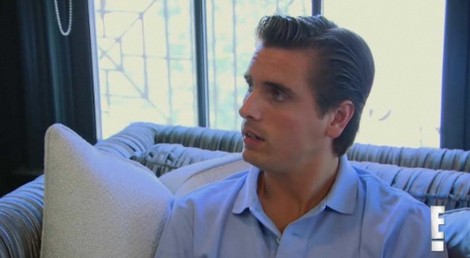 In seven short hours we will be finding out if Khloe Kardashian is infertile, if Kourtney Kardashian will ever see Scott Disick as more than a sperm bank, and why Kris Jenner is going under the knife—again!

The official description for tonight’s episode, “Cuts Both Ways,” reads, “Tired of Kourt making all the decisions, Scott considers a vasectomy. Kris goes in for surgery to replace her breast implants and Kim asks Khloe to go with her to a fertility clinic.”

You can watch a short video of Kourtney telling Scott that she wants to have four more babies below! Scott freaks out, saying, “I don’t want to be outnumbered by my children!”

It looks like tonight will be pretty emotional. We know that Khloe and Lamar want kids. They’re such a strong couple, I would love to see them as parents. (Although there’s always the chance that, if Kim ever has kids, Child Protective Services will seize them and turn them over to Khloe!) Tonight, Khloe will visit the doctor and possibly find out that she has an inhospitable uterus, or that her ovaries are on strike and won’t produce eggs. I want to see her and Lam-Lam talking adoption! So many kids need homes, and they would be awesome parents.

If you missed last week’s episode, you can read the recap here.  Basically, Kris and Bruce Jenner agree to homeschool Kendall and Kylie, Kim says she couldn’t sell herself out for publicity, Rob won’t stop crying about his hair loss and general loser-ness, and Khloe and Kourtney can’t take Kim’s emailed apology seriously.

Check back at 9pm EST for live coverage of tonight’s all new episode of Keeping Up With The Kardashians!

Tonight’s recap: The show starts with Kim getting a text from Kourtney! She’s in labor!  The girls scream (predictably) and start jumping around the kitchen. Kim is just kidding though.

Kourtney tells Scott that she wants four more kids. She considers remodeling the house to make room. She tells Khloe that she no longer believes in birth control, and Scott says he doesn’t like condoms. It seems like there will be more pregnancies, unless they figure something out!

Kris’s last boob job was in 1989, when she enhances to a D-cup. 23 years later, she is excited to reduce and lift.  Kris jokes about posing for playboy. I don’t think Hugh Hefner is that desperate though. Maybe she can talk the sisters into doing a sexy centerfold?

Khloe jokes that Scott only tans his front, so his beer belly looks like leather, and his back is stone white. (This isn’t an exaggeration.)

Kris complains about the bikini-style panties the doctor gives her to wear during the operation. She is super nervous about going under the knife. (But don’t sympathize too quickly, this surgery is purely cosmetic. There is no medical need for it at all!)

After some gross shots of Kris getting cut into, we see Scott and friends planning a “last hurrah” before the baby comes. It’s also his birthday. They stop by a Kardashian store and his friends pose with Kardashian bikini pic beach towels.

Kendall and Kylie call a very drugged-up Kris, who calls them “sweet little bunnies,” (possibly a hint that we can expect Playboy spreads upon their 18th birthdays?).  The girls start to ask Kris if they can borrow from her closet. Pretty bitchy and manipulative.

Scott tells his friend that he is considering a vasectomy. He says he wouldn’t tell Kourtney and that he could just lie and say that he must have become randomly infertile. A friend tells Scott that Kourtney probably has a secret freezer full of his sperm, and that there is no way he can get out of having more kids.

Kim and Scott go to the hospital to visit Kris. Her hospital room looks like a hotel, and her dinner is rack of lamb. Scott jokes that he was in the same hospital for his penis reduction. Kris scoffs. She asks Scott how excited he is for the new girl. Scott sounds nervous and admits he is worried it will be a lot different than a baby boy.

Scott tells Kourtney he is going to the doctor to get a physical. Kourt is surprised and applauds his responsible, adult decision.

Scott sounds like an idiot, telling the kids, “I can’t keep popping these kids out every other week.” A little misleading about his relationship! He realises that the surgery may require hair removal, which would be a red flag to Kourt. The doctor says it is a pretty permanent procedure.

Rob warns Scott that he has to tell Kourtney.

Kris tries to show her family her new chest (which is all bruised and stitched and nasty looking). Khloe asks to see them after they’re healed. Kris keeps yelling, “please look at my tits!”

Watching Kourt prepare the new baby’s room, and Kim says she is getting older and wants kids.

Kris notices some missing clothes, and is furious that the girls took advantage of her while she was drugged up.

Kourtney catches Scott getting dressed, and he lies (lamely) that it’s his friend’s birthday. Rob told Kourt about Scott’s desire for a vasectomy, and Kourtney says that he has to talk to her about something like that. Scott says Kourt never asks him before she makes a decision, he says he was just checking his options.

Kim mentions that she wants to go to a fertility specialist after hearing about a young friend who can’t have kids anymore. She may want to freeze her eggs. She mentions that Khloe should come.

Rob tells Kourtney that Scott feels like a big walking sperm, and that the lack of affection in their relationship hurts him. Kourt makes that signature “oh, well” face she does so well.

Kendall and Kylie go to their mom’s closet and find out that she’s locked the door. They go through her drawers searching for a key, and are caught by Kris. She says the girls have to start a library-lending system, where they sign in and sign out things they borrow.

Kendall says she’ll work on how to get around the new rules.

Kourt tells Scott that he shouldn’t be going out when Kourt is so close to having a baby. He didn’t check in with her, either.Kendall says she’ll work on how to get around the new rules.

Kourt tells Scott that he shouldn’t be going out when Kourt is so close to having a baby. He didn’t check in with her, either.

Khloe and Kim head to their appointment at the fertility center. They each have ultrasounds done. The doctor thinks Khloe hasn’t ovulated, which would mean she couldn’t get pregnant.

Khloe finds out that her hormone levels are normal, and the episode ends with her listening to the doctor as he explains the different things they’ve measured.

Next week: Kourtney goes into labor, Khloe tells the family about her fertility results.