Keira Knightley And Michael Fassbender Got Drunk Before Spanking Scenes 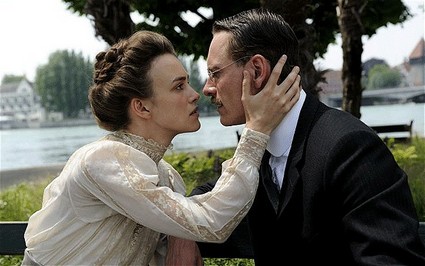 Keira Knightley and Michael Fassbender needed to get drunk with vodka shots before filming the spanking scenes for ‘A Dangerous Method.’  Keira star as psychiatric patient Sabina Spielrein and Michael as her therapist, the great Carl Jung, in the David Cronenberg movie. Jung was a disciple of Sigmund Freud who later deviated from, and rejected, much of Freud’s teachings. Somehow the word ‘DEVIATE’ seems appropriate for this film… .

Keira admitted that her and Michael only got through the more uncomfortable scenes – which included Michael spanking her – by turning to booze.

Keira told Culture magazine: “We only had one or two shots maximum. It was a vodka shot to calm our nerves and away you go really. Then we had champagne. We drank quite a lot of champagne actually. You can count on Michael to buy a bottle of champagne when one is required. The vodka and champagne is a good combination.”

Keira also revealed she now only chooses roles that challenge her and she loves to be frightened by her movies.

She added: “I think all the work I have done over the past five years has looked for the thing that really frightens me – the thing that I really don’t know how to do. I think it is for selfish reasons. If you manage to do something that is a big challenge, you get a hell of a lot out of it, regardless of whether the end product works or not.”

Keria did not elaborate on what it felt like to be spanked by her co-star. Perhaps we can get an opinion from Michael?