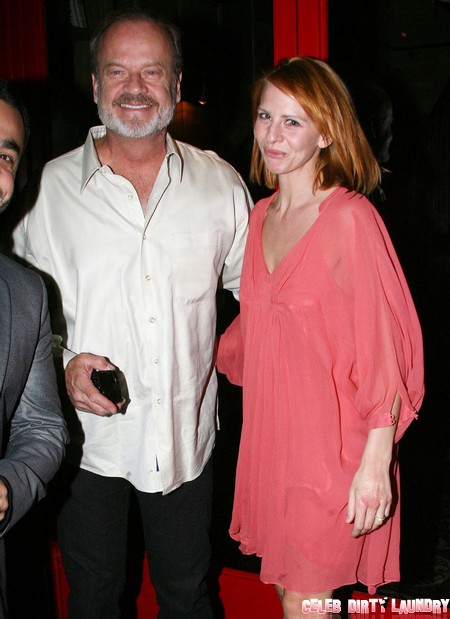 Looks like Kelsey Grammer is doing what he does best – he’s being a bad husband. This is the star’s fourth marriage. His current wife Kayte Grammer, formerly Kayte Walsh, is from England and he moved her to Chicago away from all her family and friends.

Kayte is pregnant with twins and sources say she is feeling all alone and miserable. She misses her family and friends. She doesn’t even have any friends in Chicago. Kelsey is filming his TV series Boss. Leaving his pregnant wife all by herself while he works a lot of long hours.

Kelsey was married to former Real Housewives of Beverly Hills star Camille Grammer when he found love with Kayte. I wonder if his new wife is worried about him leaving her as well. Camille was blindsided by how Kelsey ended their marriage.

Kelsey has been on TV for a long time staring in so many shows it seems like he could take some time off to spend with his homesick wife. Maybe he should put himself in her shoes.  The 57 year old actor got his wife’s name tattooed on his hip. He said it was to prove his love to her. Who’s he trying to convince… her or himself.

The Grammers got married in February 2011. Then the couple renewed their vows at Little Church Of The West in Las Vegas after only being married a year.  It seems like he’s trying to hold on to this wife. With his work eating up so much of his time and life Kayte has to wonder where she and the twins will fit in.  It’s so bad that when Kayte had her baby shower the only guests were people he films his TV series with.

Maybe this fourth marriage will be Kelseys last. I know I don’t want to see a twitter picture of Kelsey’s hip again – tattoo or no tattoo. Its time grandpa Grammer settled down.