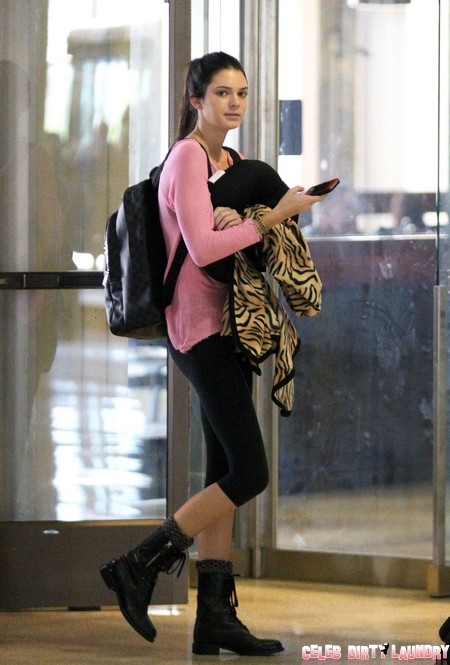 The youngest of the Kardashian Klan is the smartest! A new piece in Genlux Magazine announces something so wonderful, I never even thought to wish it! We’ve been reporting the mediocrity of the Kris-Kim-Khloe-Kourtney-Rob Kardashian family (sometimes featuring Bruce Jenner, but more often featuring Kanye West). Watching their lives is like a TV show version of “An Idiot’s Guide to Doing Nothing and Making Millions.”

We previously reported that sisters Kendall and Kylie Jenner, offspring of Bruce and Kris, staged an intervention with their parents to get on track with their schooling. We were disgusted that Kris would even consider having the girls miss school to model—but at least Kris’ priorities are consistently out of line so we know what to expect!

A new interview in Genlux Magazine confirms, Kendall does not want to be considered a Kardashian! They reported, “Kendall Jenner moves to the beat of her own drum. The stunning 5-foot 11-inch Wihelmina model, as witnessed in this photoshoot for Genlux Magazine, is on her own path to stardom . . . outside the Kardashian reality machine.”

It’s already been rumoured that the Jenner sisters are working on science fiction novels together. Obviously these girls want to work hard and get paid—rather than the Kim Kardashian method: famous father + leaked sex tape = ka-ching!

Is it too good to be true? Is it possible that the girls who grew up in the bizarre, black and white house of Kris Jenner (which, BTW, totally has semi-nude pics of the Kardashian trio hanging around it. What mom puts up nude pics of her kids?) will be the first ones to escape it? Can Kendall Jenner escape?