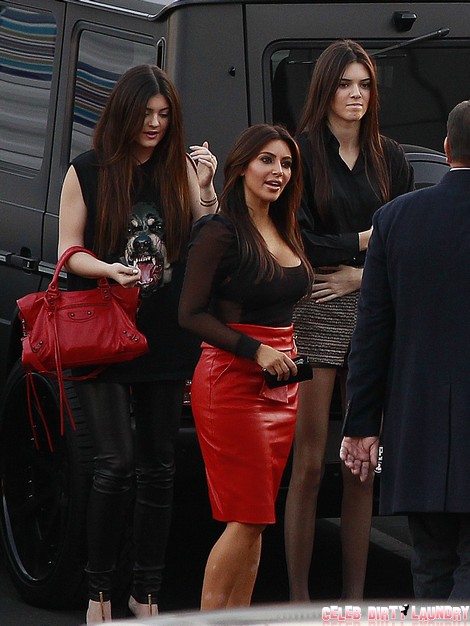 With a momager like Kris Jenner, it’s difficult to imagine any circumstance in which Kendall Jenner could hope to turn 18 without having almost nude photos spread across the Internet. Like her trashy stepsisters Kim, Kourtney, and Khloe Kardashian, Kendall has taken to posting scantily clad pictures on her Twitter. While Kourtney has kept everything pretty well covered since becoming a mom, Kim is constantly being hounded for comments about rumored sex tapes, and Khloe is horrifying viewers of The X Factor USA with her breasts. I wonder if the Jenner sisters Kendall and Kylie have any positive role models or influences in their lives. Just one to say, “maybe instead of modeling bikinis and lingerie you should go back to high school.” Is that so much to ask?

Kendall, who is barely 17-years-old, posted a scandalous picture to her Twitter account today that seems to be an idealized version of the Kardashian motto, surrounded by four sets of sepia-toned boobs. The quote reads, “keep it classy, never trashy, just a lil’ nasty.” If that isn’t already scrawled across your bathroom mirror in harlot scarlet lipstick, go and do so now! It’s a great mantra and goal for the Kardashians to strive for—up the class, minimize trash, and limit the nastiness to weekdays only, please. The quote is set over four photos of a topless Marilyn Monroe, who is holding either large flowers or a small towel over her chest.

I’m surprised that Kendall and Kylie are turning into Kardashian trio copycats so quickly—I expected super conservative dad Bruce Jenner to help them keep it real. Last season on Keeping Up With The Kardashians we saw him approve of the girls dropping out of high school to focus on work, and studying part time with a private tutor instead. The Olympian dad may have started the series with their best interests at heart, but it’s obvious that the queen of the trash Kris Jenner has whipped him into shape. What do you think of Kendall’s philosophy?