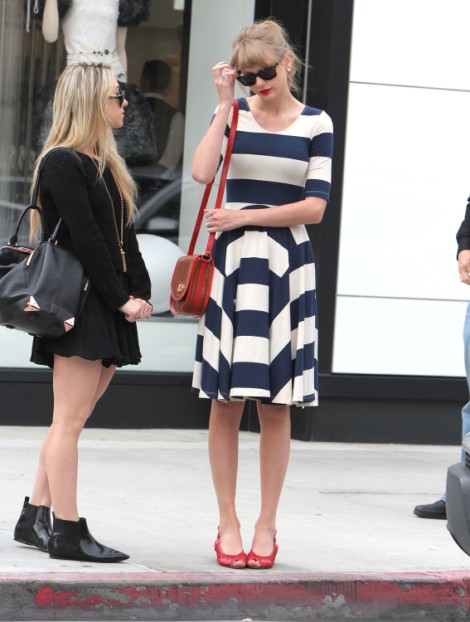 Taylor Swift’s dependency issues are really becoming apparent especially since she summoned her 18-year-old boyfriend, Conor Kennedy, to her side via a private plane after only being apart for one week. I get summer loves but this is getting ridiculous! And I’m not the only one. Page Six reports Conor Kennedy’s family members are also giving each other the shifty eye and are worried Taylor’s going to up and marry their future politician and probable embarrassment. Doesn’t Conor know the rules? Kennedy men are endearing at first and then f-ck up with celebrities. He’s doing it all backwards!

A source said, “Taylor missed Conor so much, she sent a plane for him a few days later. He’s been with her ever since, and his family doesn’t know when he will be back. Things have become so serious between them so fast that no one in Hyannis Port would be surprised if they eloped,” and added Taylor seems “totally in love with Conor. They are inseparable and are all over each other all the time. While his relatives really like Taylor, some feel their lovey-dovey behavior is cute while it has made others in the family feel a little uncomfortable.”

WTF? This has sh-t storm written all over it. First, that kid has to be an emotional wreck dealing with his first major loss (his mother committed suicide) and, presumably, his first major love all within months. His family should keep a better tab on him. Calling Aunt Maria Shriver! Make sure you know when that boy is coming home! And doesn’t Taylor know not to p-ss off her boyfriend’s family? Crashing weddings and stealing him away from home when he should be back at his HIGH SCHOOL boarding school probably isn’t the way to win its heart. But elopement? Marriages to 18-year-olds usually doesn’t last unless they’re Mormon and the teenager is the girl.

I’ve always heard that Taylor was a nut job when it came to relationships but I’ve always brushed it off thinking she was too cute and talented and sweet to be crazy. But now I know I was wrong. Taylor Swift is crazy. Well, let me rephrase that. She’s a young girl in love. We’ve all been there. You meet someone who you think you’ll be with forever and you’re too young and naive to know better. You spend all your time with him and life is completely hopeless when he’s not around. That’s normal. That makes Taylor just like us. Only she’s a millionaire, so all her money and access transcends her normal lovey obsession to Fatal Attraction levels. Somewhere Joe Jonas, Jake Gyllenhaal and John Mayer are giving each other high fives. Conor’s one missed phone call away from finding some dead rabbit stew.