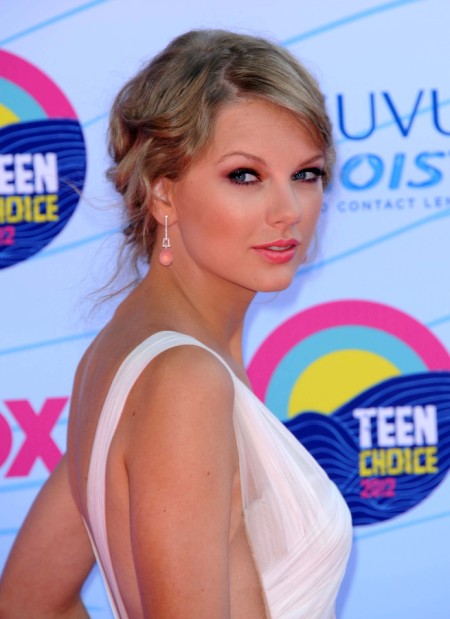 The backlash from the Taylor Swift/Conor Kennedy summer romance is incredibly interesting! First we had the rumors that Taylor was one step away from a child molester because she was kicking it with Conor before he was 18. Then, she was told NOT to show up at a Kennedy wedding last weekend, but naturally couldn’t understand why anyone wouldn’t want her company, and went anyway; and now leaders of the Kennedy women have put out a vendetta on the relationship.

Let’s not forget, in the Kennedy’s relatively short history of being American royalty they’ve been involved with bootlegging, murder cover ups and rigging elections. And that’s just from the men! The women may sit nice and smile for the cameras, but according to the National Enquirer, cousins Maria Shriver and Caroline Kennedy are not about to let that little country tart into their clan without a fight.

“Maria and Caroline both think that Taylor is moving in on RFK Jr.’s barely-legal son way too fast,” a source close to the Kennedy clan told The ENQUIRER.

“They see her as a ruthless social climber who will stop at nothing to become part of America’s most famous family. Maria and Caroline plan to make sure this is NOTHING more than a summer fling,” the source said.

“Once the traditional Kennedy clambakes and summer boating parties settle down, they intend to freeze Taylor out of the social scene. They want her to go back to Nashville and let Camelot be!”

This is too much! I’m sure when Taylor line-stepped her way into Conor’s heart she had no idea her public image would take such a hit. She can wear nautical stripes and Mad Men-inspired bikinis all she likes but she’s officially the trashy girlfriend from the other side of the tracks!

Do Maria and Caroline have a point? Hells ya they do! Conor is still in high school and his mom just committed suicide. A serious, high profile relationship is probably not the best thing at the moment. And you can’t really blame Maria and Caroline for being overprotective. Taylor bought a house right next to the Kennedy compound for christ’s sake! If that doesn’t scream stalker I don’t know what does.

However, I will make this point about Maria Shriver. Arnold Schwarzenegger was a notorious Kennedy collector before she married him. I heard that he was uber fascinated and obsessed with the family which made their marriage kind of creepy (much like Nicholas Cage’s to Lisa Marie Presley). So Maria should watch who she calls a social climber who just wants to marry into the Kennedy family. I’m not saying she’s wrong. Taylor does have a Kennedy obsession. I’m just saying, there’s that thing about people in glass houses throwing things.

Do you think Taylor Swift’s boyfriend should be getting some of the backlash as well? Should they slow down until Conor’s out of high school at least? Are Maria and Carolina overreacting? It’s not like this summer romance is going to last anyway, right? Anyone else waiting for another Taylor song about Romeo and Juliet?