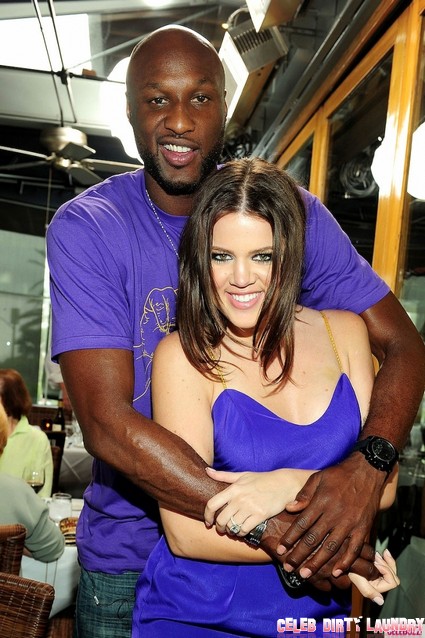 Khloe and Lamar returns tonight after a one week hiatus with episode 3 called ‘Cuffed.’  hmmm seems he handcuffs himself to Khloe, sounds likefun… not!  The last time we saw the show it was a 2 part season premiere.  The premiere recapped what everyone had been up to since last season. On part one of the season premiere Lamar’s bromance with Rob Kardashian hit a major snag after Rob decided to move out. Khloe tried too keep her marriage spicy and new but Lamar was not interested.  If you missed the first part you can read our official recap here!

On part 2 of the season premiere Lamar who is in the middle of the NBA lockout is having trouble sleeping. Lamar’s insomnia negatively affects Khloe when he gets up to play video games in the wee hours of the morning.  If you missed the second half of the premiere you can read our official recap here!

On tonight’s show Lamar thinks Khloe treats him like a baby and sets out to change her behavior.  Lamar takes matters into his own hands and handcuff himself to Khloe.  Needless to say she is not pleased about it.  Rob tries to carve out a life for himself that is outside of his sisters’ shadows.

RECAP: Tonight’s episode begins with Rob, he is upset that he doesn’t have a career and all his sisters do. He confides in Lamar that he wants to get into a sock company. Khloe is happy for him and she hopes he is going to follow through with it.

Lamar is still in his lockout and doubts he will even play this year. Lamar has a photo shoot, Khloe really babies him and gets him on his way.

Meanwhile, Rob is visiting a friend of his who just inherited his father’s company, Bijan. Rob shares his thoughts and ideas with his friend Nick.

Lamar arrives on his photo shoot, he is told that Khloe called and they will get him out by 6pm. Khloe calls Lamar and asks if he has eaten yet, when he says no she is upset because she told them to feed him. Khloe calls in and tells the people at the shoot to feed Lamar otherwise he is going to get cranky. Meanwhile, Lamar is embarrassed that Khloe keeps checking in on him. When he gets home, he tells Khloe that it was all a little too much, the mothering. He goes on to call he Dawg and says that he’s a grown ass man, 32 years old.

Rob and Khloe are at the gym, he tells her that he wants to start a sock company and he feels that she is being negative. Rob understands that everything he has started has not been successful, but he is looking for his families support.

Lamar is with his friend who teases him about Khloe being too clingy. Rob heads out to lunch with Nick, he tells his friend that Khloe shot down his idea for the sock company. Nick tells him that he shouldn’t quit, no idea is too small and he shouldn’t quit if he is passionate about it.

Lamar is with Khloe, she has to head to a business meeting, he handcuffs himself to her and tells her that she is going to see what is like to have him near her all day like he did when he was at the photo shoot.

Rob is working with a designer, to get a professional portfolio done to bring to manufacturers.

Lamar and Khloe are on their way to dinner party for a new fragrance launch, they are still hand cuffed. Lamar has to got to the restroom and Khloe goes in with him. At dinner, the other business partners did not seem to be amused that Khloe and Lamar were hand cuffed to each other. Dinner is over and Khloe asks how much longer they are going to be hand cuffed and tells her until “you ease up homie”.

Lamar finally un-cuffs them when they arrive at home, but Lamar is clearly upset and goes out for a drive. Khloe calls him, he tells her that he loves when she takes control but he doesn’t like when she is overbearing.

Khloe is out the next day with Rob and when he shows her picks of Melita who did the photo shoot.

That’s it for tonight, don’t forget to come back next to find how Rob does with his sock company.