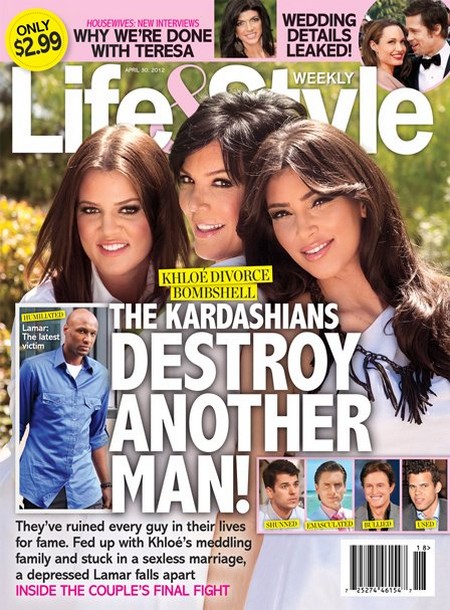 The current issue of Life & Style magazine features the cover story ‘The Kardashian Destroy Another Man!’    The magazine has the bombshell news that Khloé Kardashian and Lamar Odom are getting a divorce.    Rumor has it Khloe is at her wits end as Lamar has all but abandoned his loving wife over his obsession with regaining his former basketball prowess and glory.  The magazine has all the details on the couple’s final fight.

Life & Syle has the scoop: “They’ve ruined every guy in their lives for fame.  Fed up with Khloé meddling family and stuck i a sexless marriage a depressed Lamar falls apart. “

Can Khloe and Lamar’s marriage survive Kris’ meddling?  Nobody forced Lamar to take on the Kardashian famewhore mantle – he eagerly put it on and ignored his athletic talent in order to be a big TV star.  Can Khloe and Lamar’s marriage survive her desperation for a baby and his failing career?  According to Life and Style, No, they are headed to the divorce courts.  The magazine goes on to claim that the Kardashian women abuse their men: they say Kris Humphries was used; Rob Kardashian is shunned; Bruce Jennier is bullied and Scott Disick is Emasculated.

Also included in this week’s magazine Brad Pitt and Angelina Jolie announced they were getting married last week and the magazine has the leaked wedding details.

To find out all the details about Khloe and Lamar’s explosive fight and the leaked Angie and Brad wedding details, pick up the current issue of Life & Style Magazine!