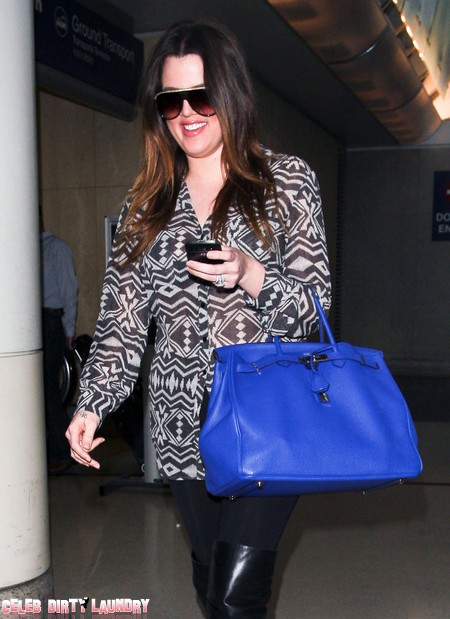 Contrary to recent reports that all is well between them, Khloe Kardashian is hitting the bottle and is being driven to divorce Lamar Odom.  Khloe is at her wits end as Lamar has all but abandoned his loving wife over his obsession with regaining his former basketball prowess and glory.  Lamar has cut Khloe off from sex and has even ‘put the brakes on the pair’s plans to begin IVF treatments,’ according to an inside source.  Khloe has resorted to alcohol according to sources close to her.

Lamar is adamantly refusing to sign on for the next season of ‘Khloe &Lamar.’ Because ‘Lamar thinks the reality show is bad for his career,’ says an insider, ‘He’s done!’  Adding to Khloe’s woes is that since moving to Dallas after Lamar was traded to the Mavericks ‘The team’s wives have snubbed her,’ a friend says.

A friend of Khloe’s sadly reports that Khloe is drinking by herself to drown her sorrows and is ‘so depressed’ that she sits and drinks.  ‘Khloe downs the wine,’ says the friend.  At a recent party in Dallas, Khloe just hung by herself with her drink…

In Touch Print Edition April 16 explains:  Three years after their fairy-tale wedding, insiders say that the couple is on the brink of a split – and that Lamar’s cruel decision to put basketball before his baby-hungry wife is to blame.

A show insider and friend reveals that the 32-year-old is now refusing to appear on the next season of ‘Keeping Up With the Kardashians’ claiming the famous family’s series ‘will throw off his game.’

Lamar’s not only walking off the hit show, he’s virtually abandoned his wife as well.  When not travelling, Lamar ‘practices all day,’ the friend explained.

‘Lamar thinks the reality show is bad for his career,’ says an insider, ‘He’s done!’

Don’t forget that Khloe also has to deal with Lamar’s extra-marital sexcapades which we reported right here on CDL.

To make matters even worse Kris Jenner, the evil self-serving momanager, is encouraging Khloe to file for divorce to boost the ratings of the Kardashian reality TV show empire.  That woman is a monster!

We hope and pray that Khloe and Lamar’s marriage can survive her boozing, his cold shoulder, and Kris’ meddling.  What do you think?  Let us know in the comments below.