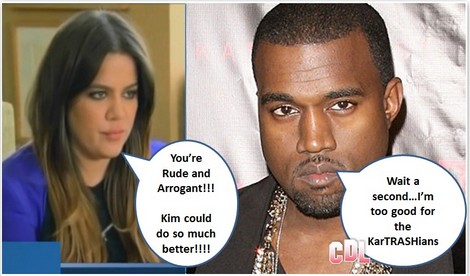 Here’s a curveball for you Kardashian fans…it seems Khloe Kardashian does not like big sister Kim Kardashian’s latest future husband, Kanye West.  In a recent interview Khloe has referred to Ye as “rude and arrogant” and that he “has a temper.”  I have seen several videos of Yeezy out and about and in each one he is either rude, arrogant, or cussing someone out.  His attitude problem is not news to anyone, but the way you are complaining about him is.

Kimmie’s first husband, Damon Thomas, was supposedly abusive so Khloe of course didn’t like him.  (Should be fun to watch these two interact on the X-Factor)  Then there was Ray J.  Khloe didn’t like him because of the sex tape thing.  Then there was Reggie Bush.  He was a slice of deliciousness so of course she liked him.  But then came Kris Humphries and Khloe did not at any time attempt to hide the fact that she could not stand him. She may have done a little acting on one of her shows and attempted to include Kris on a family outing to the zoo, but even Kris saw right through that fakeness.  (The douche nozzle didn’t do that great a job pretending to like her either.)

I will give Khloe some credit though.  The guys she couldn’t stand did not last.  Of course Scott Disick is the only exception to this rule.  After countless arguments and giving Scott an extreme version of the cold shoulder, he and Kourtney Kardashian are still together.  That is one douche that will be around for a while.

After her sister Kim’s two failed marriages and several failed relationships it is understandable that Khloe would be protective of her sister, but doesn’t she think that her public complaining about her sister’s companion could be causing problems?

Dear Khloe, mind your business and your man.  From what I’ve been reading your own rude and arrogant ways are creating a rift a little closer to home and Lamar Odom doesn’t seem like the type to deal with your negativity for much longer.