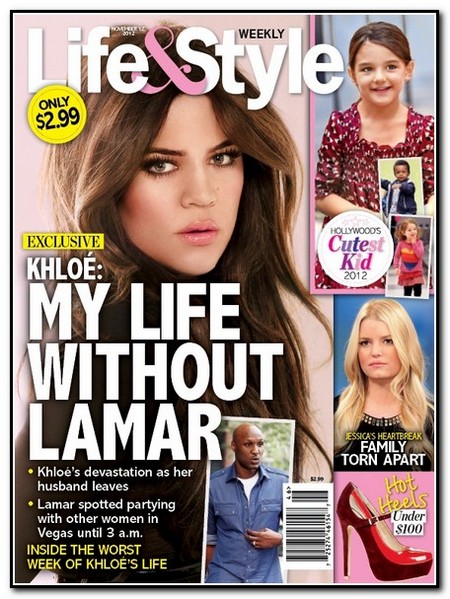 Are Khloe Kardashian and Lamar Odom heading for splitsville? According to a cover from Life & Style the two are ‘leading separate lives.’  But are they really? According to L&S, Odom is ‘drifting away’ from Kardashian, and the reality star is struggling to ‘hold on to her marriage.’ Sounds juicy but L&S ran a different version of the same story last week and no one even batted an eye. Maybe the world isn’t willing to accept a break-up between these two supposed lovebirds.

I don’t know that he’s drifting away.  He’s an NBA player and with that, comes a certain lifestyle. One in which some girls look the other way and some girls just flat out don’t like it. Either way, it’s a recipe for DRAMA.

It’s also rumored that Khloe wanted to cheer Lamar on at one of his games but supposedly he asked her to ‘back off.’ I don’t know about that. Just judging by their reality show (which is arguably hard evidence), Lamar seems like a laid back, no drama, carefree guy. So carefree to the point where I don’t even think he’d bother telling Khloe to back off if he wanted her to. He seems like he wouldn’t even notice if she was there to be honest.

We also can’t forget about the baby drama between him and Khloe (or lack thereof). Having kids hasn’t come easy for her but maybe it’s a sign. Maybe they’re not meant to be! MORE DRAMA!

Although we can’t be certain what the fate between the two of them will be, we can be certain that either way, ratings are going to go up for Khloe. If the two split, I bet Khloe will have her own show about her being single. Maybe she can be on Basketball Wives or Hollywood Exes. Or could all of these break-up rumors conveniently be happening in time to promote her debut on X Factor?