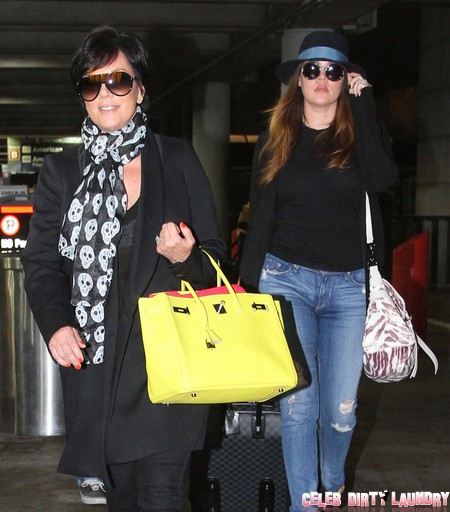 Khloe Kardashian finally did the right thing and listened to her sister Kim Kardashian’s advice about visiting a fertility clinic on last week’s episode of the super popular Keeping Up With The Kardashians. Unfortunately, the news the doctor shared with her wasn’t good at all…

We have been terrible critics of the Kardashians here at Celeb Dirty Laundry, but for once we will not be as caustic towards them as we usually are, mostly due to the private and sensitive subject matter.  The doctor informed Khloe that she wasn’t ovulating and not producing eggs to become pregnant. This news was heart breaking and emotional for Khloe, whose husband Lamar Odom asked Khloe to discontinue her fertility clinic visits due to the on-air painful reminders during the season of the show. According to a  report, Lamar insisted that Khloe stopped filming her visits to the fertility clinic, even though Scott Disick had been filming his vasectomy visits and Kris Jenner filmed her breast implant surgery. According to Lamar, the subject matter was too “private” to share with the world and for once, we agree with Lamar.

A source revealed, “Lamar has just had enough. He hates seeing Khloe cry, especially in front of millions of people. He is begging Khloe to stop filming her fertility visits. It is a private, delicate matter. Lamar has been saying this all along, but Kris keeps telling Klhoe the opposite, that there is absolutely no harm in her having her fertility visits televised.”

Once again, Kris Jenner outshines her self-created horror image by selling out her daughter for the television show. It’s surprising that these Kardashian daughters, with the exception of Kim Kardashian, haven’t thrown the bitch a beat down. The source continued, “Plus, she convinced Khloe that this would bring in huge ratings. Lamar thinks all the attention is stressing Khloe out and having a negative impact on them being able to have a baby.”

Khloe, take our advice – if Kris tries to exploit you again, punch her in the boob. She might not feel it, but it will make a long lasting dent in her bogus image.

Let us know in the comments below what you think of Khloe being exploited by that bitch, Kris Jenner.