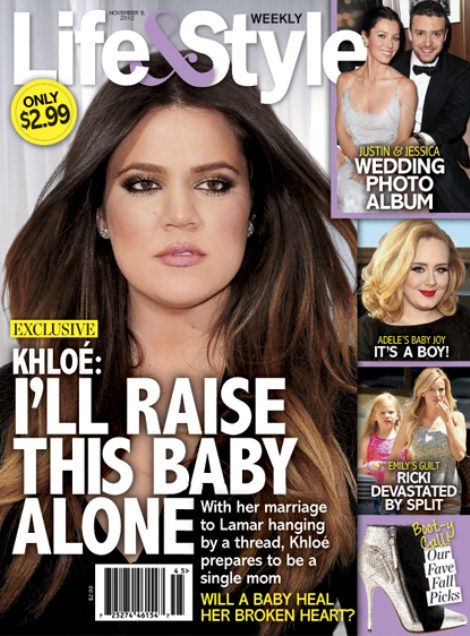 The November 5th, 2012 issue of Life & Style Magazine features the cover story “Khloe: I’ll Raise This Baby Alone!”  In a L & S exclusive story they have all the juicy details of how Khloe Karadshian plans to raise her baby alone.  Khloe has been married to NBA basketball player Lamar Odom for the past three years and rumors are their marriage is on the skids.

Khloe recently accepted a gig hosting the X Factor USA and Lamar is allegedly furious that his wife is going back on her word to dedicate this year to starting a little family and rather focusing on becoming a reality television superstar.  Friends of the couple say that the tension might splinter them apart before the fourth anniversary. Khloe was the one who spoke to the media earlier this year and said that women should “put their husband first” and that “part of being married is knowing when your husband needs your support.”

Now that Khloe has thrown caution to the wind and decided to be one of the hosts on the X Factor USA her marriage to Lamar is hanging by a thread.  Khloe does not intend to stop her plans for being a mother and she is preparing to be a single mom  Will the baby heal her broken heart from losing Lamar.  The X Factor job and being a single Mom will certainlycement her popularity, fame and financial status in the industry.  Can you just see it now?  A reality show, Khloe single Mom and baby?  ughhh….

Also included in this week’s issue they have the wedding photo of Justin Timberlake and Jessica Biel who just got married.  They also have all The Bachelorette’s Emily Maynard’s  guilt over her split with fiance Jef Holms, and what it means to her poor daughter Ricki.

To find out all the details of Khloe’s plans of being a single Mom and a whole lot more, pick up the current issue of Life & Style on stands now.