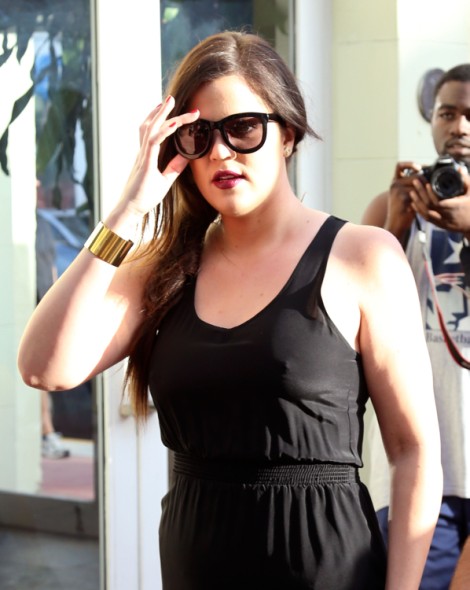 Khloe Kardashian isn’t taking to reality hosting as quickly as she would have liked. Things are getting so bad producers are even considering dropping the middle sister from hosting duties all together so she can focus on more personality-driven interviews for the X Factor. How did everything get so bad so fast?

Well, it didn’t help that producers coupled Khloe with old pro Mario Lopez. Mario’s acted and done day and night talk shows, so even though he annoys the hell out of me, he does know what he’s doing up there when you give him a mic and a teleprompter. Of course, he might like that teleprompter too much. TMZ reports he screwed Khloe royally this week by hogging some of her lines and breaking her out of her rhythm (or what little rhythm she had). Apparently, Khloe was pissed and cried to producers about it but Mario managed to convince her he wasn’t doing it on purpose and there were just some glitches going on behind the scenes. I’ve heard there’s no love lost between these two but… sabotage, anyone?

But you’d think a little X Factor host nerves and some friendly (or not so friendly) rivalry wouldn’t be the worst thing in the world if the show was doing well. The problem is it isn’t. Numbers are down – way down, in fact. So the producers are freaking and looking to make some drastic changes. I guess everyone at X Factor agrees that Khloe’s personality is what the show needs and wants (along with a lot more viewers) but it’s getting stymied by her inability to read and walk at the same time. And before we all call her a no talent dumb ass who can’t read – apparently it’s really tough for newbies to gel with a teleprompter. Khloe’s more of a fly by the seat of her mouth sort of girl so I could see how this would be a major issue. But would she walk off the show out of embarrassment? If the producers decide to downgrade her to a Samantha Harris-type role will she get all indignant and threaten to quit? You kind of get the feeling that Kardashians blame others for their misfortunes first and if they can’t have everything then they won’t take anything. HOWEVER, I like to think my girl Khloe is smarter than that. She knows working for this show in any capacity is a big deal. And it’s not run or shared with her family which is a major plus. I’d like to see her pull out of this. I’d like to see her show that she can take criticism and work hard and make something happen. If the producers decide to shuffle around her “talent”, I’d like to see her make the best of it.

Would about you? If Khloe Kardashian threatens to quit X Factor, will the producers placate her to keep her on the show or just fire her? How do you feel Khloe’s doing so far? Would she be better in an interview setting?