Kim Kardashian and Kanye West Breaking Off? What Will Kris Jenner Do! 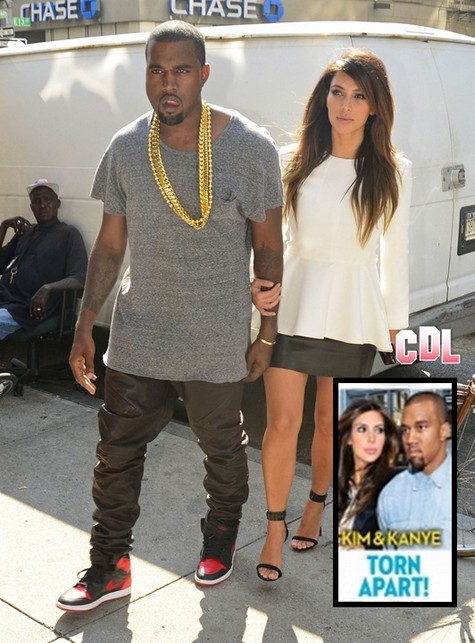 Are Kim Kardashian and Kanye West Breaking Off? It is alleged that Kanye West and Kim Kardashian switched off the relationship oven and are now rumoured to be “cooling things off”. This relationship thermometer broke in Kanye West’s armpit and the mercury is leaking out into the interwoven blogosphere of true/false/wtf. According to latest reports, “Friends are wondering if things are cooling off between Kim and Kanye.” Who are these “friends” and what did they do to friendship? Read on to find out why the relationship is cooler than Siberia.

Allegedly, “Kanye is getting tired of the constant press and promotion. He is not as tight with her as he was.” We all know by now that the Kardashian limelight is made from Uranium and glows in the dark like human popsicles on a Chernobyl expedition, but surely Kanye must be used to this? He is, after all, one of the most irking personalities since Lucille Ball. Look, we weren’t going to go there, but the whole Kanye/Taylor Swift scandal a few years ago must have given Kanye a taste of what the Kardashians experience on a daily basis? We would have also kicked Taylor Swift off stage, but we’re not world famous rappers. The Kim Kardashian relationship increased Kanye’s rep on the street, so why is the bitch bitching?

If this story were to be true, which we highly doubt, Kim and Kanye might be heading for a little town called Splitsville, where even the birds weep about their dysfunctional relationships. OMG, what would Kris Jenner do without the extra injection of fame? This could send Kris into an iPhone breaking rage and lead her to finally kill Bruce Jenner. Kim and Kanye shouldn’t call it off so soon, because the writer of this article feeds off their stupidity on a daily basis.

In other news, Bruce Jenner was spotted speaking to a moth. He named the moth “Moth” and used a bedside lamp to direct Moth to her own suicide. Don’t blame the Bruce – he doesn’t get out much.