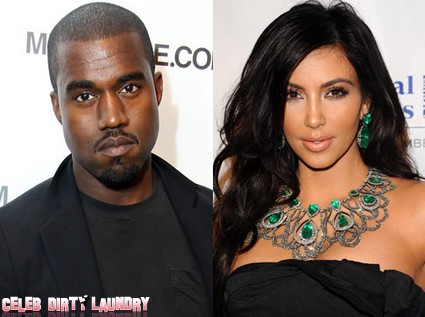 More details have emerged about the Kim Kardashian and Kanye West hook up. It seems the pair were destined to be together. Not just because the name Kanye  starts with the family’s favorite letter. But because they struck up a friendship in 2004 and have been flirting on and off for the best part of a decade. The sexual tension was going to get to them sooner or later.

According to TMZ…both Kim and Kanye have had feelings since meeting eight years ago but the time was never right to act on them. Kanye was with Amber Rose for a while and of course Kim was getting hitched to Kris Humphries. They never acted inappropriately while coupled up elsewhere but now they’re single and all bets are off. They figure the timing is now right and there is no third party standing in their way.

The twosome finally decided to hook up and get serious after they reconnected in Paris recently. They were in the City of love together because Miss Kardashian attended Kanye’s fashion show. That’s when the sparks flew for real and there was no significant other to stop them this time.

Apparently it’s been a whirlwind romance and the rapper is going all out to impress Kim even though they’re living on opposite sides of the United States. At the moment the reality TV star is back in LA but she’s hoping to get to New York as soon as possible. She likes being part of a high profile couple because it means more coverage in the press!