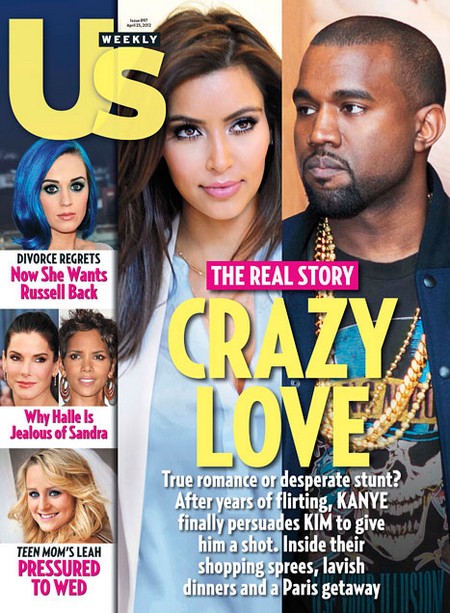 Imagine Kim Kardashian and Kanye West on a crazy double couple date with Beyonce And Jay-Z and maybe little Blue Ivy along for the ride?  Well according to a source this is a strong possibility as Kim’s new lover Kanye is a close friend and collaborator of Jay-Z’s – and the two rappers love hanging out together.  So what could be more natural than a two-couple picnic or something like that?

The cover story on the week’s edition of Us Weekly says exactly that: “ Kanye West Thinks Kim Kardashian Is ‘His Beyonce.’”  The article goes on to suggest that the double date could be not far off.

Us Weekly reports:  Imagine it: A double date between Kanye West, Kim Kardashian, Jay-Z and Beyonce (with Blue Ivy in a stroller!).

Stranger things have happened. A pal tells the new Us Weekly, out now, that Jay-Z’s close friend and collaborator West, 34, has fallen “genuinely head over heels” for Kardashian, 31, with whom he was photographed gallivanting around NYC late last week.

“It’s not a PR stunt,” the source insists of the rapper and reality star. “They’re perfect for each other. He thinks she’s his Beyonce!”

Indeed, after years of a flirty friendship — West pursued Kardashian “for a long time,” another source says — the stars were finally aligned for the twosome (who share a fondness for luxury and the spotlight) to finally get romantic.

The “Otis” rapper split with model Amber Rose in 2010, and Kardashian is famously in the midst of an ugly divorce battle with Kris Humphries five months after she filed papers.  “Now that Kim has gotten over the Kris drama . . . she sees how much Kanye loves her,” a Kardashian source tells Us.

Kim and Kanye double dating with Beyonce and Jay-Z – that will certainly make in onto one of the Kardashian reality TV shows.  The question is whether the commercially conscious parents of Blue Ivy will allow a cameo appearance by their little goldmine girl.

Apparently Kim has convinced Kanye to appear on the upcoming season of ‘Keeping Up With The Kardashians’  Now we know why Kim and Kanye made so much noise about sleeping together – it’s all about about publicity for the TV reality show!

Kim would embrace a friendship with Beyonce with a quickness.  But would Beyonce allow Blue Ivy to associate with such a slattern?  What do you think?  Let us know in the comments below.