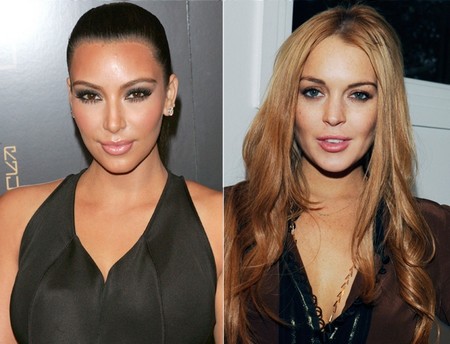 Lindsay and Kim will be seated at the same table so you might as well paint a bull’s eye on it because I have a hunch, as host, Jimmy Kimmel’s going to be referring to himself as Katniss Everdeen by the end of the night.   I bet Jimmy Kimmel didn’t know the Fox News Channel liked him so much. It’s practically writing his jokes for him.

But, unfortunately, in this busted version of The Hunger Games there will be two winners guaranteed.

Because these Playboy alumnae don’t care how bad Kimmel rips into them. They’re so hungry for the attention. You watch.  They’re going to try to create a Barack sandwich in every photo op they get.  I have no doubt this will happen because, really, the only difference between these two and White-House-dinner-party-crashing Michaele Salahi are overbearing stage mothers.  Hopefully the Secret Service will keep these two far away from Mr. President.

Do you think Kanye West will show? I doubt it since Obama just called him a talented jackass. But fingers crossed. Can you imagine the sweat dripping down Kimmel’s face as he tears into Kim with Kanye staring him down all hard and crotchety? Who knew politics could be so fun?