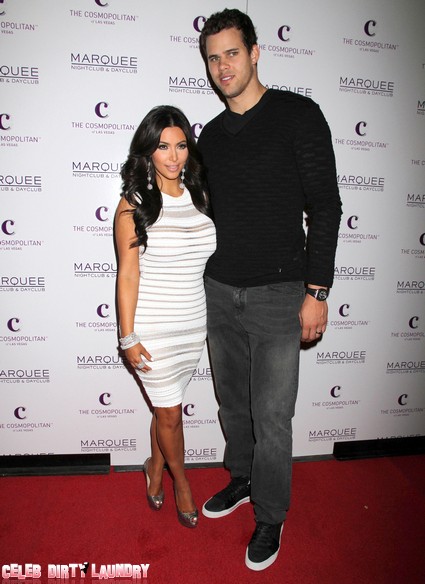 Kim Kardashian is attempting to buy Kris Humphries silence and keep her divorce off TV. More importantly she doesn’t want her marriage annulled which would negate her pre-nup and allow Kris to sound off about all the Kardashian/Jenner bullshit of which he is aware. But Kris is telling Kim to keep her blood money – he wants to speak out!

Kris and Kim split in October after just 72 days of marriage but the pre-nuptial agreement on how to split their assets and restricting Kris’ mouth is still in force. Kim is said to have offered a financial settlement in order to get their divorce completed as soon as possible and keep Kris quiet.

Kris is saying no to Kim’s money and is determined to pursue his claim to have the divorce granted on the grounds of fraud, which would annul it, arguing that he and Kim married under false pretenses.

A source told RadarOnline: “There have been informal settlement talks going on between Kim and Kris’ respective lawyers. Team Humphries has made it crystal clear though that Kris isn’t seeking any money from Kim. Kris doesn’t want one penny from her.”

“His lawyers have said the only terms acceptable for a settlement would be if Kim agrees to Kris’ contention that the marriage was a fraud. There is a stand-off at this point because Kim will never agree to that, she says the marriage wasn’t a fraud. It just didn’t work out.”

It was revealed earlier this week that Kris’ lawyers want to study video footage from ‘Kourtney and Kim Take New York’ as a heart-to-heart between Kim and her mother Kris Jenner about the marriage is alleged to have taken place in December, two months later than claimed in the show. Kris’ legal team are said to feel this strengthens their claim for the marriage being a fraud.

Kris is no saint – after all he married a Kardashian – but we are pulling for him all the way.