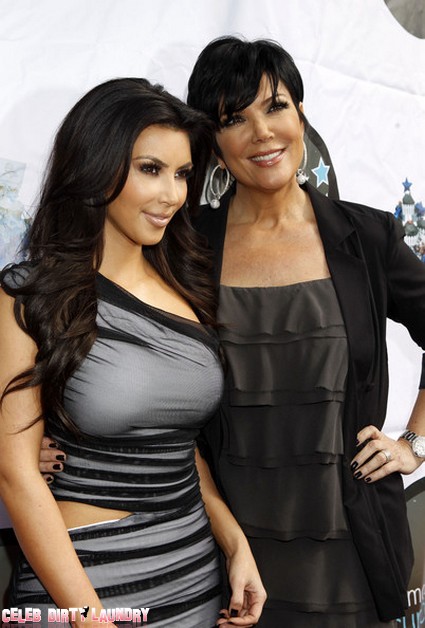 There is now proof that the heart to heart between Kim Kardashian and momanager Kris Jenner on last week’s Kourtney and Kim Take New York was totally faked and in fact did not occur in Dubai at all! Not only was it filmed in a studio and not in Dubai as shown, but IT WAS FILMED AFTER KIM FILED FOR DIVORCE FROM KRIS HUMPHRIES!!

The Kardashian/Jenner clan are disgustingly superficial people, but that is old news. That their reality shows are scripted and totally rigged is also old news. But when they add scenes filmed after Kim filed for divorce to a show that was supposed to have been taped before she filed, then we can say that the KarTrashians have reached a new low.

Last week’s show showed Kim and her mother supposedly commiserating in the limo in Dubai about how Kim didn’t want to return to her husband and asking her mother if that was normal. Of course mom assured Kim that it is not okay for her to feel that way.

But here is the kicker, while the episode of Kourtney and Kim Take New York aired last Sunday, Kris Humphries made the following cryptic tweet – “I can’t wait for the truth to come out! People will be surprised or maybe they won’t. #FCC.”

This had many people wondering what Humphries was referring to and realitytea.com has the answer:

The photos you’re seeing above of Kim and her pimpmomager Kris Jenner were taken on December 6, 2011. The photo agency which snapped the pics stated Kim and Kris were leaving a studio in Los Angeles.

Does Kim’s outfit look familiar? It should because Kim is sporting the same exact outfit, same hairstyle, and same makeup as she did in a scene that aired on KKTNY last Sunday which according to E! was filmed in Dubai… in October… weeks before Kim pulled the plug on her marriage.

In the scene, Kim tries to garner sympathy appear remorseful as she tells her mom she is having marital issues with hubby Kris. There’s only one problem folks. Kim filed for divorce on October 31 and it appears that “Dubai” scene was actually taped in Los Angeles on Dec. 6. Still having doubts? Well feel free to check out the outfit Kris’ assistant is carrying behind her. Ding ding ding! It’s the SAME “Dubai” outfit plus Kris is still wearing the same earrings.
Wowzers. So this proves the Kardashians’ shows are as phony as the Kardashians, and Kim and Kris actually filmed this scene last month to not only try to fool their audience, but to also try to make Kim a victim. Unfortunately for Kris Humphries, he didn’t get a chance to go back and film phony scenes to help his image.

To see more evidence proving the scene in question was totally fake and filmed in an L.A. studio – after the divorce filing – and not in Dubai go to realitytea.com.

Humphries and his people have always insisted that the show was fake and scripted and of course they are correct. Kim Kardashian is a shameless famewhore who has not only scammed Kris Humprhries but desecrated the institution of marriage. How will the Kardashians and their partners in deceit, E!, try to wiggle out of this scandal. Are you disgusted at being taken for a fool by Kim Kardashian? Sound off in the comments below.