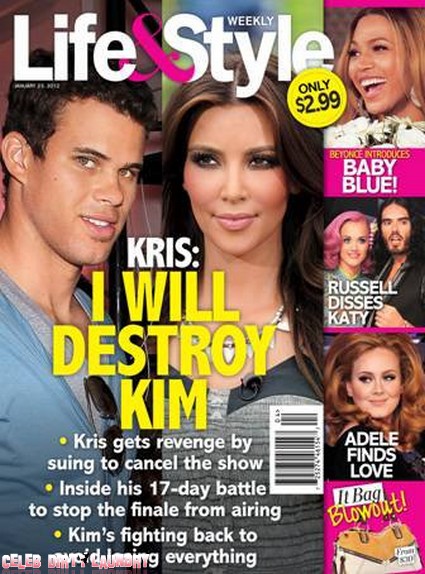 The current issue of Life & Style Magazine features the cover story ‘Kris – I will destroy Kim.’  The magazine claims to have all the details on how Kris Humphries will get revenge on Kim Kardashian.   Kim blindsided Kris by divorcing him after a scant 72 to days of marriage.   Kris is suing to get Kim’s reality show Kourtney and Kim take New York cancelled.  He has been fighting for 17 days to try to stop the finale of the show from airing.

Life & Style has more: Life & Style has exclusively learned that Kris has consulted with his lawyer, Lee Hutton III, to discuss what steps to take and he’s preparing to sue his estranged wife, Kim Kardashian, in an attempt to get the show canceled. “He’s not going to be vilified,” a Humphries insider confirms in the new issue of Life & Style, on newsstands now. “Kris knows his rights. He will sue.”

“Kris was very pissed off at what he saw on TV,” a friend of his reveals to Life & Style. “He had to be calmed down. It was noticeable that Kim was doing voice-overs after the fact — the editing was horrible.” Indeed, Kris promptly lashed out: “I can’t wait for the truth to come out,” he snapped. “People will be surprised — or maybe they won’t.” And he let his more than 800,000 Twitter followers know how he felt. In a post, he made a deliberate reference to the FCC — the Federal Communications Commission, which regulates TV broadcasts and could have the power to pull a show off the air.

I have been watching Kourtney & Kim takes New York and we have been recapping the show each week.  There is no doubt that they are trying to edit the show to make Kris look bad.  But they are failing – the whole Kardashian train wreck looks like immature, entitled spoiled brats and Kris is the only one among them that looks like an adult.

Kim on the other hand insists this is all nonsense. “He wants to sue because he saw what he looks like on TV and he’s embarrassed now.”   This should be interesting I can’t wait to hear what Kris has to say about this whole mess.

What do you think is Kim the innocent victim here?  To find out all the details and how Kris is trying to get Kim’s show taken off the air, pick up the current issue of Life & Style.