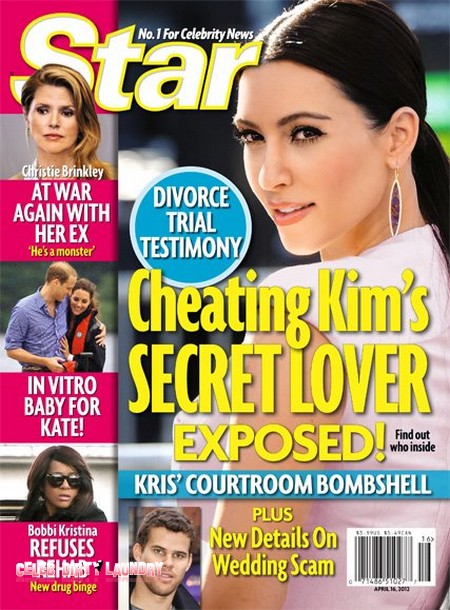 The current issue of Star Magazine has the cover story ‘Cheating Kim’s Secret Lover Exposed!’  The magazine screams in huge yellow letters across the from that Kim Kardashian cheated on her husband of only 72 days Kris Humphries.  Of course they are going to reveal all the dirt to us.  This has all been revealed in the divorce trial testimony where Kris dropped a courtroom bombshell.

Star has managed to get their hands on new details on the wedding scam and they have the name of Kim’s secret lover.  We are just going to have to buy a copy of Star to find out who the secret lover is.

Also featured in this week’s magazine Star has all the details on Christie Brinkley’s at war with her ex-hubby.  They are speculating that since it is the first wedding anniversary of Prince William and Kate Middleton’s marriage and she is not pregnant perhaps she will have a baby via in vitro Fertilization?  Are the Royal couple having trouble getting pregnant?

The magazine also claims that Bobbi Kristina has had a new drug binge and that she is refusing to enter rehab.  Bobbi has a history of substance abuse and the tragic loss of her mom could serve as a trigger for further problems.