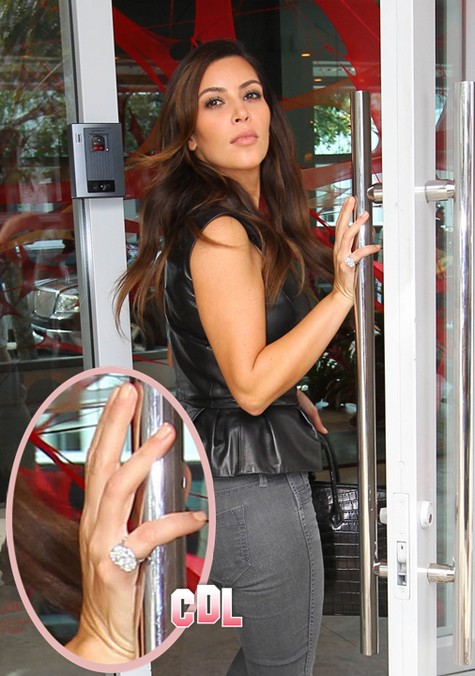 Rumors were running wild that Kanye West was supposed to propose to his girlfriend over the weekend in Italy where the couple were celebrating Kim’s 32nd birthday. Well, they came back and the world was saddened to hear that nothing actually happened. But au contraire, says a source close to the reality starlet. They did get engaged! Kim Kardashian is wearing the ring as we speak. It’s just not where it’s supposed to be just yet.

According to MediaTakeOut.com: “[It] spoke to a member of the PRODUCTION TEAM of Kim’s show, who tells us that Kanye gave her a 10 CARAT flawless diamond – and told her to wear it on her PINKY until her divorce is final. Then, claims our snitch, the couple can get it resized together . . . so that it fits her RING FINGER.”

Oh Kim, so sneaky! But that’s a step down right? This 10 carat diamond ring is nothing compared to the massive stone Kris bought her. Was she disappointed? Or did Kim settle for class over carat this time around? It’s definitely gorgeous. I’m pleasantly surprised Kanye didn’t try to outdo the last ring. That would have just been embarrassing. This is actually sweet (if a 10-carat ring could ever be considered sweet).

Still… is it a little tacky that she’s engaged again without being divorced first? I suppose it’s been awhile since she left Kris – must longer than the marriage at least. Kim’s entitled to be happy so congrats to the couple. I won’t even ask the obligatory Will it last? questions. Let’s let everyone believe that it will!

I am a little disappointed that a member of the production team leaked the story though. Does that mean the proposal was filmed for the show? Will Kim ever learn to keep her private life away from the cameras? If Kanye West proposes on camera, is the marriage doomed from the start?