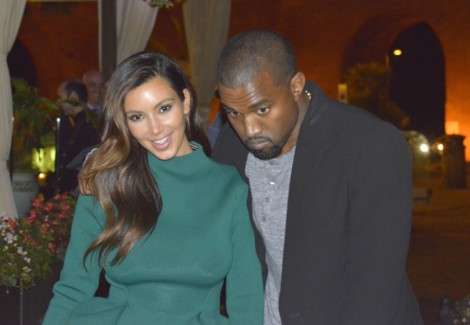 Kim Kardashian could be walking down the aisle again! She’s yet to get divorced from Kris Humphries but pish posh, that’s just a minor practicality. And how do we know that Kanye West wants to make an honest woman out of her for the third time? Well, besides all the house hunting, and ring rumors and “white dress” lyics, Ryan Seacrest is spilling the beans… sort of.

Apparently, on his morning radio show, Ryan discussed all the engagement rumors surrounding Kim and Kanye. Then, all cryptic and secret-like, he said, “I think we could definitely see an update on this story on Monday.” Say what? That sounds promising.

Kanye recently whisked Kim off to Rome to celebrate her 32nd birthday in style. She tweeted it was a surprise but I can’t imagine Kim allowing that to happen since she’s a bit of a control freak. But how would Ryan know then, you ask? Well, Ryan’s naturally the producer of all the Kardashian shows and spin-offs and Kim is currently filming Kourtney and Kim Take Miami. Did Kanye tip him off? Will the proposal be on camera ? Are you kidding me? Of course it will! And so will the wedding. I don’t care what she says now. Kim’s determined to never learn from her mistakes which is way fun for us.

But I don’t want to go too hard on Kimmy. Let me know what you think. Are you behind Kanye West proposing or not? Is it tacky to get engaged when you aren’t even divorced yet? Does anyone out there feel sorry for Kris Humphries? You know who I think is pissed right now? Jennifer Lopez. First Kim comes along and steals attention from her famous ass and now she’s steadily trying to out Elizabeth Taylor her. If only this fight took place outside of my imagination!