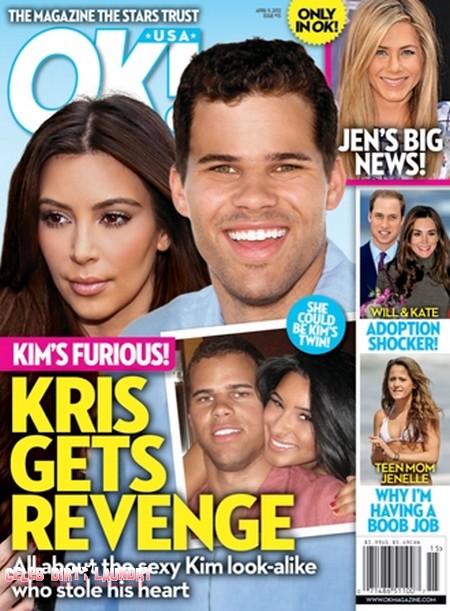 The April 9th issue of OK! Magazine features the cover story ‘Kim’s Furious – Kris Gets Revenge.’  The magazine has the scoop on how Kris Humphries is repairing his broken heart after his disastrous 72 day marriage to Kim Kardashian.  Kris has been keeping a low profile concentrating on his basketball career since the breakup but now he has hooked up with an old flame and the magazine has all the details on how the sexy Kim look-alike stole his heart.

OK! has more:  “Kris was all about taking numbers and having fun,” says a friend. “He wasn’t really being considerate of girls’ feelings; he was more about just playing the field and keeping his options open.”   That has changed, however, now that he’s talking to Bianka Kamber again. Bianka, a 28-year-old nurse from Toronto, was Kris’ girlfriend for two years. He never forgot her. “Bianka was his first love,” explains an insider to OK!. “She’s a very down-to-earth, sweet girl. He admits he wants to win her back.”  The thing is she looks strikingly similar to Kim!

This should totally piss Kim off she was already mad at Kris for starting the mud-slinging that has grown into an all-out publicity war between the two.   Her public image is now in tatters and I’m sure Kimmie will be none to happy that Kris has moved on so fast.

More: Televised Divorce Will Ruin Kim Kardashian’s Life And Portray Her As A Monster

Also included in this week’s magazine Teen Mom Jenelle Evans has a baby and a criminal record and soon she will have a new body.  Apparently Miss Evans is going to have a boob job.   The magazine also claims that Prince William and his bride Kate Middle want to adopt a baby.  There is one caveat OK! claims they must have a biological baby first.  Since William has recently returned from the Falklands the couple are rumored to be trying to add a little Royal to their family.

To find out about Kris’ revenge on Kim Kardashian and a lot more, pick up the current issue of OK! in stores Thursday!