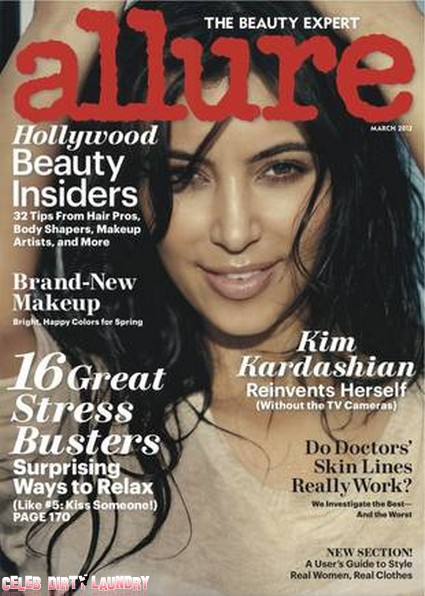 Kim Kardashian scrubbed off a thick layer of eye makeup for her March Cover of Allure magazine. The 31-year-old reality star— who says she “will always believe in love”— went for a more natural, straight from the beach look for the Norman Jean Roy shoot that the magazine calls her re-invention. Inside the magazine, Kardashian’s bare look complimented the interview where she lays herself bare, or tried to, by discussing her ticking biological clock, her regrets about her very public marriage to Kris Humphries, and her new commitment to privacy.

During this past season of “Kim & Kourtney Take New York,” we saw Kardashian decide to have kids with Humphries, only to change her mind before the episode was over. “Do I want kids of my own? Absolutely.” Kardashian says. “But I don’t know if that’s what’s meant for me. Maybe I’ll just work, work, work, and not think about it.” Though she may not be able to make kids happen for herself—personally, I think she’s being a little fatalist about her options there—Kardashian also opens up about how she would be willing to carry her sister’s baby if Khloé were unable to conceive [which is the rumor]. “Khloé joked with me and said, ‘Will you be my surrogate? … I said, ‘I think I have a couple more years when I just want my body to myself. At 35, I promise I’ll consider it.’”

However, on what she will choose to film from now on, Kardashian says that, unlike mom Kris Jenner, she has limits— though she does admit that she decided to film her wedding and marriage to Humphries for posterity. “When I saw Khloé and Lamar get married—and they had their wedding on TV—I thought, Oh, my gosh, that’s so exciting! That’s what I want! If you were to ask me now, that’s not what I want.”

Still, Kardashian says the 72-day marriage experience “definitely made me want to be more private with my relationship, whenever I choose to get into one again. I’m not ready, but when that time comes, I’ll be more cautious about who I let my world open up to.”