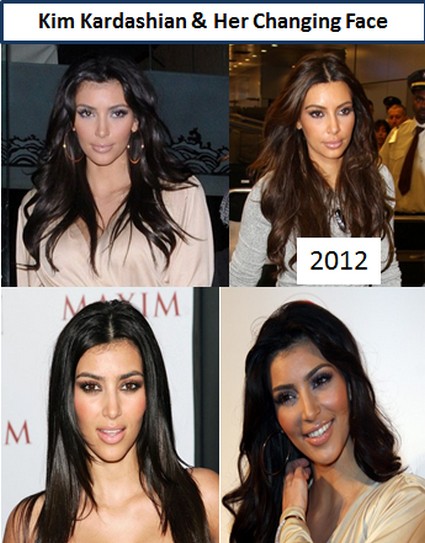 Kim Kardashian has gone wild with cosmetic surgery since she filed for divorce from Kris Humphries. Always obsessed with her appearance, and not shy to have doctors use every available technique to enhance her appearance, it seems Kim has gone into overdrive recently. While some women get anorexic after a difficult end to a relationship, for example the way Demi Moore has after splitting with Ashton Kutcher, Kim seems to have opted for more plastic surgery on her face and body to rebuild her psyche.

As Kim certainly hasn’t given up being in the public eye or banished herself to a convent after filing for divorce from Kris, we can assume that the girl just wants to look her best. Pictures of Kim over the years show all sorts of unnatural changes as she continues her metamorphosis into what she and her doctor’s think is the ideal woman. Whether it’s a plumper butt or bigger lips you can count on Kim to buy whatever she thinks she needs.

In Touch Weekly Print Edition lays it out for us:  Recent photos of Kim Kardashian show her sporting a plumper pout. A friend of Kim’s confirms to In Touch: “Kim is even more addicted to plastic surgery than ever before.”

While the 31-year-old star has always been overly concerned with her looks, plas say she’s become obsessed ever since her October split from Kris Humphries and subsequent fall from grace.  Instead of retreating from the public eye to regroup, Kim’s putting all her focus on her appearance.

“It was likely done with a filler like Restylane,” he tells In Touch. Celeb makeup artist at Valery Joseph salon Rachel Gangemi agrees: “There is no way lip gloss and lip liner can create that much volume!”  While fillers may be helping her get closet to her beauty ideal, her antics are only driving friends and family further away.

“Her sisters think she’s so vain,” says the source. “They feel like all she cares about is her image.”

Nobody ever taught Kim that beauty is only skin deep and when accompanied by an evil character and superficial personality one will still be appear as a monster.