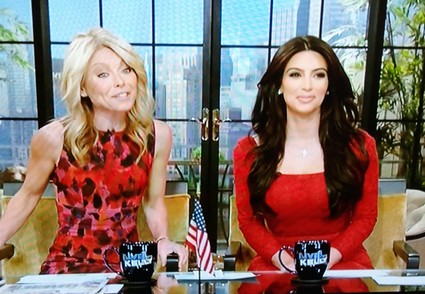 We knew that Kim Kardashian couldn’t exactly get away with co-hosting Live With Kelly and not open up about her divorce with Kris Humphries.  So who better for Kelly to kick off women’s co-host week with her than Kim?  And thankfully, she was as open and honest as she can be (so she says).

When Kelly asked how she was doing after the media backlash over her 72-day divorce and where she was at now, Kim said:   “It’s been a hard couple of months”.

“If you really think about it, if this was a business decision and I really made all that money that everyone was claiming that we made off this wedding, and if the wedding was fake and just for TV, I’m a smart businesswoman, I would have stayed married longer,” I really didn’t think following my heart would create this much backlash.”

Kim also said: “I tried everything she could do to make the union work,  I think I just learned that I need to re-write my fairytale”.

And make it private. Much more private.