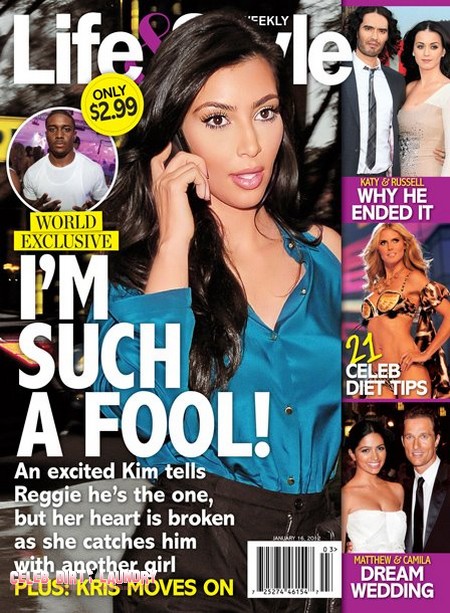 The current issue of Life & Style features the cover story ‘Kim Kardashian: I’m such a fool.’   The magazine has a world exclusive with the story that Kim Kardashian decided to tell her former boyfriend Reggie Bush that he was the one.  BUT, Kim was in for a big surprise when she caught Reggie with another women.  Now Kimmie’s heart is broken, boo hoo…

Kim has been rumored to be turning to her former flame Reggie for some TLC after her disastrous marriage to Kris Humphries ended after just 72 days.   As Celeb Dirty Laundry previously reported when Reggie dropped the news to his mom Denise Griffin she was not pleased. Denise urged Reggie not to take Kim back! She was sure that Kim has ulterior motives and does not want to see the two of them hook up again.

Perhaps Reggie listened to his Mom who seems to know exactly what she is talking about and ran into another girls arms as soon as he could.  What do you think?  Do you  feel sorry for Kim?  Meanwhile the magazine claims that Kim’s ex husband has moved on.  Good for him!

Life & Stylehas learned that Kim’s dreams of a renewed romance were dashed on Dec. 26 when a fan posted a sighting of what her or she thought was Kim and Reggie at a Smoothie King in Miami that day. Kim wasn’t even in town, however!  “Reggie has always dated Kim look-alikes,” notes a friend. “She knew it must’ve been yet another look-alike at Smoothie King. It was a wake-up call for Kim.”

Also featured in this week’s magazine – for the New Years resolutions 21 celebrity diet tips.  Russell Brand filed for divorce from his wife Katy Perry and the magazine claims to have the scoop on why he ended it.

To find out all this and more, pick up the current issue of Life & Style.