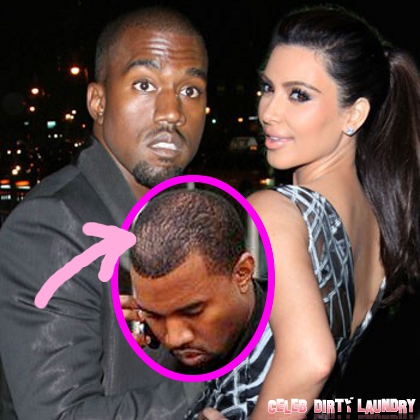 Looks like lately Kanye West‘s hair has been getting thinner and thinner, and it doesn’t surprise me in the least because of all the stress he’s been receiving from his relationship with Kim Kardashian. All the misfortune Kim has brought upon Kanye so far is quite ridiculous; I don’t blame his hair for wanting to just get the hell out of there and turn him bald!

For one thing, Kim is slowly but surely destroying Kanye’s relationship with Jay-Z, the two used to be good friends who were practically inseparable. Now Kanye won’t even attend Jay-Z’s parties because Kim is banned from them as Beyoncé hates her with a passion, so of course Jay-Z has to listen to his wife.

The two bros are drifting farther and farther apart because of Kim in general; I can’t even blame Jay-Z and Beyoncé for how they feel. Who would want to hang out with someone who got famous for nothing but a sex tape? That’s pretty pathetic in my books.

Kanye should just go ahead and shave his head; I’ve been bald myself; it’s not all that bad. Plus facial hair makes you look like a bigger badass when you’re bald, it’s quite awesome. My advice to Kanye: either dump Kim, or shave your head and grow one amazing beard — his badass rating would increase by at least 46%. To see Kanye’s thinning forest click here.