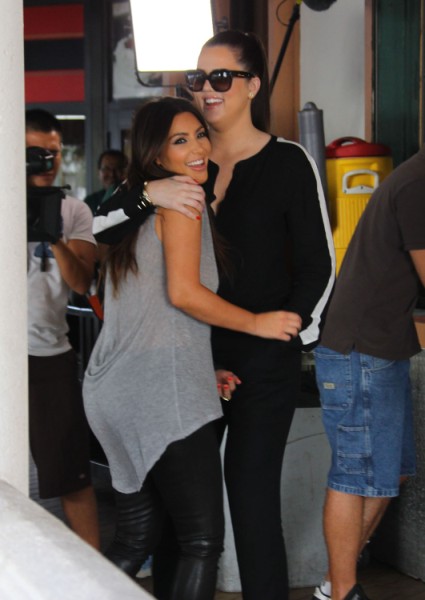 England gave us the Beatles and now we’re returning the favor and granting our friends across the pond the Kardashians! The enterprising sisters are unveiling their Kardashian Kollection for Dorothy Perkins. The plus-sized fashion friendly line will feature more than 100 pieces in sizes 8 to 16 so every woman in Britain of every size can feel Kardashian sexy without the help of a sex tape or reality show. You’re welcome.

“I am really glad to be able to promote a healthy, natural body shape, eating well and exercising and appreciating the shape that you naturally have,” Kim Kardashian told the Sun. “I was a teenager in the 90s, which was the era of grunge, the waif and heroin chic. Female models were skeletal, and with my Armenian background that was a mold I was never going to fit.”

I wonder how the line will do over there. I don’t think Keeping up with the Kardashians is shown in the UK although I could be wrong. Not that that totally matters. Kim, Khloe and Kourtney are top selling celebrities with or without the show and the British love their trashy reality stars just as much as we do (hello Katie Price). I just don’t see the draw of Kardashian curves or a plus-sized friendly line in the UK. But whatever, if there’s an untapped market, Kris Jenner will find it and milk the hell out of it.

All the girls will be in London over the weekend to pimp the hell out of their new line. I was wondering why Khloe wasn’t doing more of the interviews but she apparently will be the last to arrive. She’s busy filming the X Factor and can’t get over to London yet. I figured Khloe would be the face of this brand since she’s talked so heavily about being bullied for her looks and body and could be considered the most successful Kardashian at present if you look at her new hosting job. But Kim is hogging all the attention for now. It’s a sound business decision. Although Kourtney and Khloe are a part of the brand, Kim is the face and has said she wants to be an ambassador to Britain for curvy women. I’m sure they’re only too grateful.

Are you anxious for the Kim Kardashian launch, I mean the Kardashian Kollection launch in London? Is is as respectable to wear the Kardashians as say H&M, Topshop or Forever 21? I don’t think so but I could just be a snob about the whole thing.