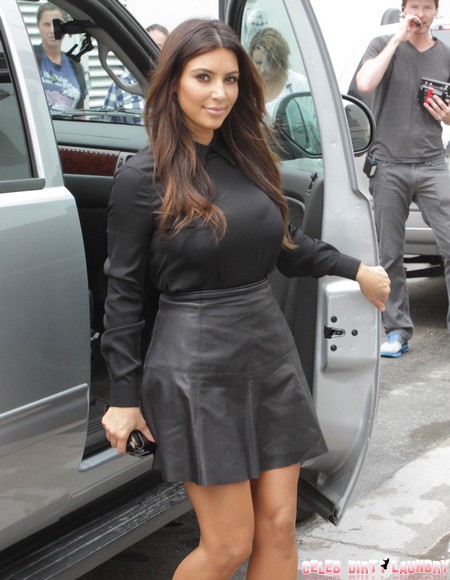 This is the most shocking news since Kim Kardashian told Keeping Up With The Kardashian viewers that she no longer wears fake eyelashes. I called BS on that, but I think this is true! For those of you that haven’t attached yourselves like barnacles to the Kardashian world, let me get you up to speed. This season there was quite a bit of dissent in the Kardashian family when Kim said she was considering starting a solo brand in Asia. Her sisters/business partners Kourtney Kardashian and Khloe Odom were completely furious, bringing up their dead father, who they swore would have been ashamed of Kim’s selfish decision.

I call this foreshadowing, because it sounds like Kim’s new super controlling boyfriend, rapper Kanye West (infamous for being being so mean to Taylor Swift at the 2009 VMA’s) who, among other things, recently cleaned out Kim’s closet, replacing almost everything with Kanye approved clothes, wants to market the “Kim and Kanye” pair instead of “Kim and her big neurotic attention seeking, talentless family.” A source reports, “Kim has secretly been getting embarrassed about how much her family share and there’s no way Kanye would allow the intimate moments of their relationship to be filmed. He is happy to be in the background, but he thinks some things should be kept private.”

This is a surprise to hear, since in a recent interview Kim said she would “never say never” to another huge TV wedding. Trouble in paradise? The source also told, “Kanye is thinking of their brand as a duo now, rather than a family’s. He thinks some of what she’s put her name to is tacky and has already advised her to say no to certain things.” I bet momager Kris Jenner just loves that! Kanye fits in to the family perfectly (rich, whores himself out for money, talentless), but ain’t no one going to replace Kris! Can’t have that bond severed, or pretty soon Kanye will be the one getting a cut of Kim’s profits, not mom!

The source concluded, quite rightly, that “the whole empire is based around Kim and it is her celebrity status that drives the brand. For her to turn her back on it would not only be a devastating blow to the family, but most of all to her mum, Kris, too.” I expect the new season of Kourtney and Kim Take Miami will settle a lot of this. Obviously she had already signed the contract or Kanye would have made her quit, but I won’t be surprised if Kourtney complains that Kim is never at the Dash store. Only three and a half months until more drama unrolls right on your TV screen. Will you be watching? Would you be sad to see Kim leave reality TV, or is this a blessing?