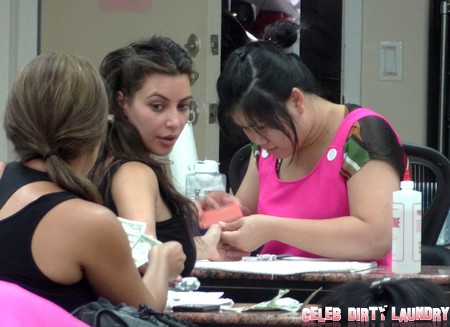 Kim Kardashian has left her little birth control pills in order to get Kanye West’s baby! According to a source, Kim’s relationship with Kanye is going so fast that she’s already gone off birth control. We weep at the thought of a pregnant Kim Kardashian.

A while ago, The Enquirer reported that Kim didn’t want to get pregnant, because her dollar sign figure would become compromised, but things change quicker than John Travolta’s hairline in La-La Land. A Kardashian insider reveals to In Touch Weekly, “Kim is ready to have babies and talks about it all the time.” Kim is also allegedly taking “the necessary measures” to make it slightly easier to get that bun into that oven!

The mere existence of a Kardashian/Kanye spawn would result in volcanoes popping their lids on a distant Asian island, so we’re sorry Kim and Kanye, but we think it’s time for us to sneak off this planet and maybe find a place more hospitable, like the seventh dimension of hell? The two have also been looking for a house with a nursery, so their baby is comfortable when the mangled fame whore Kris Jenner sneaks into the room and abducts the child to take modeling pictures. Don’t worry Kim, Kris will be back before sunrise – vampires don’t stay out late.

The source says, “It’s doubtful they will get married, but they are actively trying for a baby. All their friends and family know.” Oh poop, why did you go and tell Bruce Jenner? He was blissfully living under a rock with Patrick from Spongebob Squarepants playing with a Botox needle and drooling in the snow.

“Kim has told both her sisters and close friends that they shouldn’t be surprised if she and Kanye elope,” says the naughty secret spilling insider.

Kim, if you plan to expose the world to a fat, innocent little baby, please ensure that the name is up to Kardashian standards? Firstly, don’t name the kid after a country or a fruit. Secondly, we came up with a few names, if you would like to hear us out? You’re more than welcome to try one of these – Fame Whorian Kardashian, IhateTaylor Swift Kardashian, Mymomis A Poophead Kardashian and finally, our favourite of the bunch, Send Me Back Into This Bitch (Why Couldn’t I Be Born As An Obama?) Kardashian.

We hope it’s a finely tuned pregnancy, Kim! We can’t wait for the millionth spin-off show when the baby’s exorcism is documented.