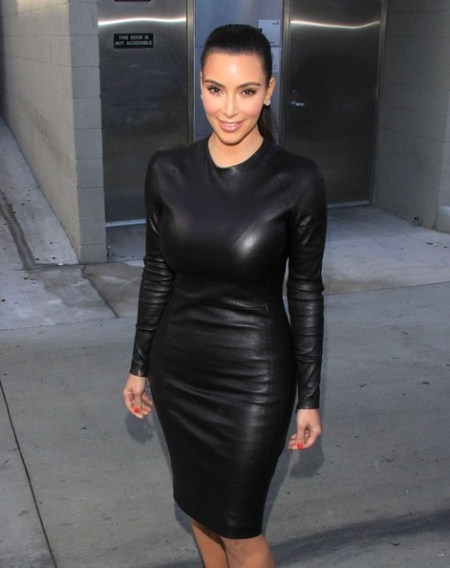 Right before Kim Kardashian was going to appear on Jimmy Kimmel this week, her leather dress completely ripped down the back. Not one to keep anything about her life private, Kim tweeted a picture of the ripped dress with the following, “About to do Jimmy Kimmel & my whole dress rip! Help!!! Time to sew me in…praying this works!”

Maybe the reason Kim’s dress split is because she has put on some weight? Maybe she’s gotten herself pregnant by Kanye West? Wow, can you imagine bringing a child into the world and telling them, “oh baby, guess what mommy has, A SEX TAPE!”

Now, a pregnancy would certainly tie the whole “Kanye and Kim shackin’ up together” thing. Both have recently decided to move in together after dating for just a few months and although we know Kim likes to work fast, what’s the big hurry about anyway?

Poor Kanye (can’t believe I said that) has no hope here, no matter what happens. Kim has a 72-day track record where wedded bliss is concerned and she hasn’t even legally gotten a divorce before moving in with another guy, spells TRAMP to me.

What I wonder here is, what Kanye would name the baby (if there was one ofcouse) because it can’t just have some generic name; it’s got to be just as amazing as he is. Maybe Kanye would pick a new name that the world has never heard of like, Jean Edward Antonio Takashi, a mix of several foreign names into one.

Now what I really wonder is how Jay-z and Beyoncé would react to the possibility of Kanye and Kim having a baby. I bet they would totally write these two off, they have already banned Kim from being near them and Kim is ruining the relationship between Kanye and Jay-z, so this could be the finishing blow, a nice combo breaker!