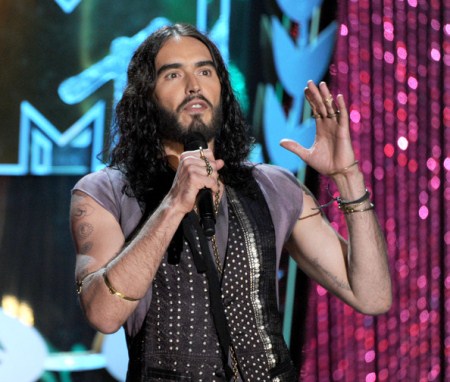 Russell Brand was at the MTV Movie Awards and let off some very risqué jokes about the scandal with John Travolta; he referred to allegations against this Pulp Fiction bad ass buying gay sex after a massage, he joked about giving Travolta a massage “He needed it, man. He was so stiff, I’m telling you!”

Also at his two hour performance at the Los Angeles Gibson Amphitheatre, the British comedian even made fun of Kim Kardashian, Charlie Sheen and (some untalented lesbian looking boy) Justin Bieber.

Brand went so far as joking about finding a new wife during the event since it was on a similar stage that he met his current ex wife, Katy Perry during the 2009 Video Awards, “Last time I did an MTV show I ended up marrying someone.” Following that he said “Tonight I’m going to keep my eyes peeled for my next wife.”

Now I was kind of surprised when Brand thanked Kim Kardashian! Yep, he thought it was wonderful that she broke the world record for her 72-day marriage marriage with Kris Humpries making his 14-month marriage in comparison seem like forever, “Kim took a lot of pressure off with her world record marriage – cheers, Kim.”

The best of Brand on stage was when according to our source, he then begged Kim Kardashian to make another sex tape with her current boyfriend Kanye West,  “I think of Kim Kardashian as the Stanley Kubrick of sex tapes. They’re always brilliant, but he only does one a decade.”

Now I’m really left thinking that Brand’s sex life must be really bad without Katy Perry being there with him to want to see both Kanye West and Kim Kardashian going at it… Though knowing Kanye’s ego like we do, he probably wouldn’t mind making one, that he would consider one of the best sex tapes of all time. (and leaking it on his own)