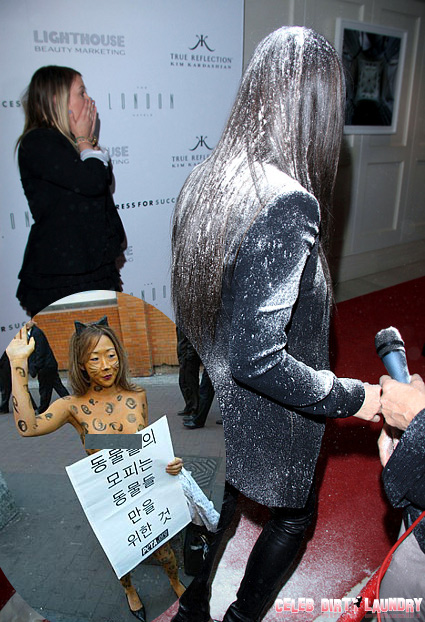 Kim Kardashian and the story of her being “flour-bombed” has gotten lots of coverage over the past few days. Well now we know the true identity of Kim’s flour bomber. Her name is Christina Cho, a young raging animal rights protester who’s been known to arrange elaborate, dramatic anti-fur rallies.

According to our pals over at Hollywood Life, Cho is a “militant and influential PETA activist.” PETA, as we reported last night, says they had nothing to do with the attack, but with this new information . . . things continue to get fishy. Not only has PETA come out and said they would extend full support to Ms. Cho (for any legal predicaments she might soon find herself facing), but they’ve released a statement verbally chastising Kim K.

After discovering who the woman was and becoming aware of her past affiliation with PETA, Khloe Kardashian has removed herself from any further PETA support.

What do you all think about this issue? Let us know in the comments section below.