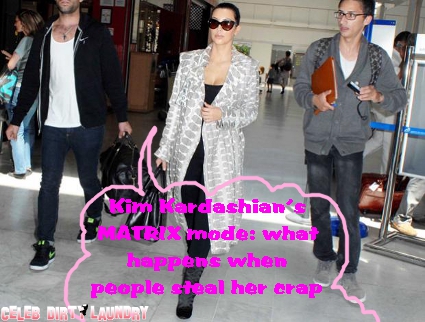 Kim had just spent a PDA (public display of affection)-filled jaunt at the Cannes Film Festival with her beau Kanye West, only to return back to Los Angeles and find out that a few of her things were missing from her luggage.

Kim took to Twitter to reveal the sad and devastating news.

“Very disappointed in British Airways for opening my luggage and taking some special items of mine! Some things are sentimental and not replaceable. What happened to the days when you could lock your bags! We need to get back to that. There’s no sense of security and no trust!” she continued before adding, “Shame on you.”

What a bad ending to such a nice getaway for poor, poor Kimmy.  Kim, 31, and Kanye, 34, was spotted together in France looking hot and heavy, holding hands at events, and posing for the cameras.  Kim was there to show support for her man, who was premiering his film/art installation, Cruel Summer.

So what exactly is missing from Kim’s bags?  If the gal kept jewelry in there, then shame on her — number one rule of flying is to always keep your valuables in your carry-on. Tsk, tsk.

A British Airways spokesperson told the BBC that they were looking into the claims.  Because I’m sure they’re going to find out whoever hijacked here loot. Rigghhhhtttt…..

Wonder how momanager Kris Jenner feels about this whole situation?