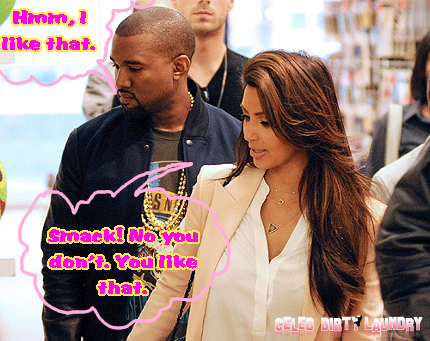 Kim Kardashian must be smacking her new boyfriend Kanye West around pretty good — and he must like it, because he’s closed that mouth of his and is following her around like a tiny puppy dog, no questions asked. Kankim has just been solidified as the latest Kim and Kanye pet name/couple label. Or is it more a case of Kimkan, seeing that Kim KarTRASHian is the boss of Kanye? No chasing Kim off the stage, Kanye!

Kim has moved her clothing items into Kanye’s house so the two of them can kick start their lives as Hollywood’s latest, hottest coupling. Kris Humphries (first time I realised that Kris’ name is the same as Kim’s mom) is still not legally divorced from Kim. The Kardashian head honcho has some demands for Kanye; he has to remove every single trace of his ex-GF Amber Rose. Kim even demanded that a new mattress be bought for the couple as she does not want her delicate derriere to touch the mattress which Amber’s bum touched.

The National Enquirer reported, “Kim and Kanye’s relationship has moved fast, but she’s setting the ground rules from the start.  She has warned him she doesn’t want to see anything in the house that belonged to Amber or was given to him by her.  Kim threw out some of Amber’s old T-shirts as well as some sentimental bathroom towels that Amber brought for Kanye.  She really wants a fresh start with Kanye.”

Is this really a way for Kimkan to start afresh? Or is it more a case of Kim losing the plot? We all know Kim is not the most successful at relationships. Her quickie marriage to Humphries was parodied to death and Kim’s penchant for the overly dramatic doesn’t always sit well with her romantic interests. We all know Kanye lost the plot a long time ago, pushing the delicate little flower Taylor Swift off stage and all… You know you’re a pompous idiot when even President Barack Obama calls you a “jackass”.