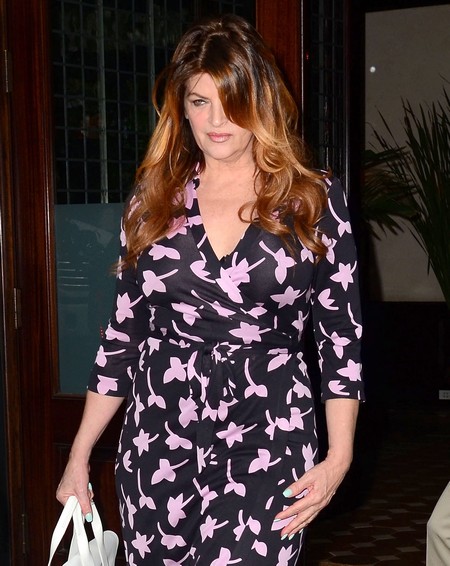 Kirstie Alley was recently at the Book Expo America event in New York City and people were able to see that she has gained quite a lot of weight while promoting her upcoming memoir.  As you can see in the photo, Kirstie decided that she would try to hide her recent weight gain by wearing some sort of floral dress and it didn’t work because it’s still very noticeable.

Our source reveals “Kirstie’s under a lot of pressure to get her memoir done, so she’s been holed up at her homes in Florida and Kansas over the last few months writing, her weight seems to fluctuate with her moods. Based on her appearance in New York, she’s clearly gorging on food again and has hit 200 pounds. She’s trying to hide her bloated body in big, loose dresses, but she’s not fooling anyone.”

Honestly, Kirstie looks like a whale now although she did lose a lot during her time as a spokesperson for the Jenny Craig weight loss program. Obviously not everyone is like Jennifer Hudson, most dieting programs such as Jenny Craig or Weight Watchers don’t work for a lot of people and many gain all the weight back in the real world, this is a good example.

Being overweight “again” puts Kirstie back at facing health risks; fat hurts your heart, triggers diabetes, wrecks your joints and many cancers are linked to obesity. Hopefully Kirstie takes control now and doesn’t go back to her reported highest weight of 300 pounds.

Apparently this recent weight gain has been caused due to her stress while writing her new book “The Art of Men (I Prefer Mine Al Dente)”. Damn, even the book has a reference to food in it, this woman is just destined to be fat forever!