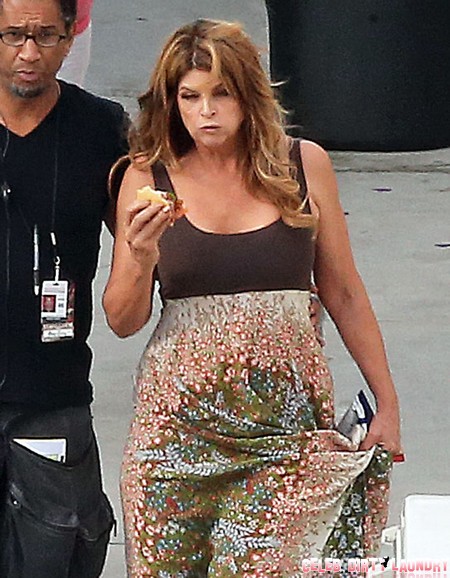 Kirstie Alley, the ex-actress and Dancing with the Stars contestant is piling on the weight quicker than a kleptomaniac at a food court. At the time of writing this article, and peeking at the computer screen from behind packets of hypocritical Lay’s crisps, Alley was most probably eating a small baby cow.  According to a source, “Kirstie had lunch at the same spot two days in a row and ate the same thing both times. She inhaled the heaping plates full of turkey, chips, and guacamole, along with chicken tortilla soup laden with tortilla strips.” That’s an estimated 1400 calories and 84 grams of fat in a hearty serving!

The actress’ 12th season stint on DWTS helped her go from an all-time-high of 230 pounds, to a low 130 pounds – a loss of 100 pounds in less than three months. Unfortunately, during Alley’s second run on DWTS, the actress and her pro dancing partner, Maks Chmerkovskiy, suffered from low scores and a season-long bottom place on the overall leader board. A source alleged, “Kirstie knew all of the other dancers were far younger and in better shape, and that experience could likely end in failure and in embarrassment. She held on for as long as she could, but toward the end she started gorging out of nervousness. She gained 2 pounds prior to her exit and eight after, and she’s quickly going to hit the 200 pounds mark again.”

DWTS was not the only culprit in Alley’s arsenal of demons. According to a source for National Enquirer, “She was hoping to revive her sputtering film and TV career with a win on DWTS at the same time as her tell-all book, The Art Of Man, was out. But that didn’t happen.” Regrettably, Alley also told friends that she’ll be clogging her arteries and gorging on comfort food until New Year’s – at which time the actress is most probably planning on taking up a New Year’s resolution to stop eating.

A friend added, “She’s back to devouring her beloved high-fat high salt diet – Chinese food including Chow Mein Kung Pow chicken and dumplings. And she’s just learned how to make homemade pasta, but she did enjoy those bowls of rich knocking and buttery fettuccine Alfredo. Kirstie is eating like there’s no tomorrow since getting kicked off Dancing with the Stars, and friends are worried she’s headed back to the same unhealthy fat versus abyss that she struggled with for more than a decade.”

Well, if you take into account the incessant Apocalypse theories, perhaps Kirstie is “going all out” before the world is turned into mash potato on the 23rd of December, 2012 (or is it the 21st of December?) If the actress continues eating like a ravenous African child, there might not be space for her on the rescue boats. It would be a fat shame.

Sadly, while we’d love to judge Kirstie Alley’s weight gain, all we can say is, “Look who’s talking with the salty Lay’s crisps in hand…” 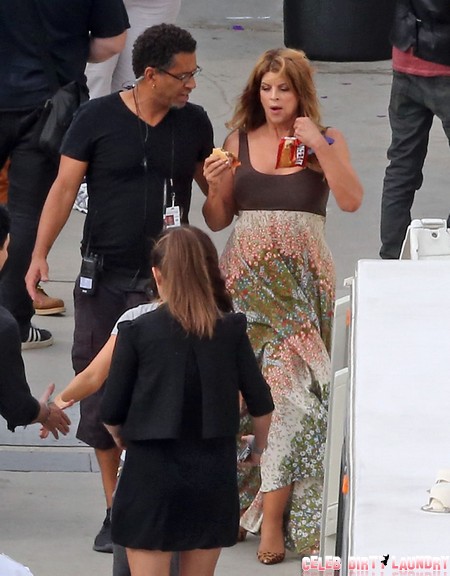