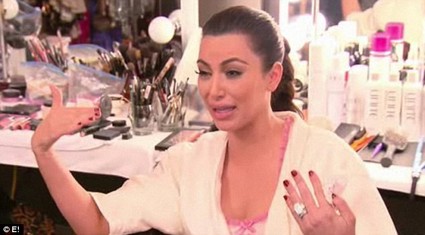 Did you watch last week’s episode of “Kourtney and Kim Take New York” when Kris Humphries patted Kim Kardashian on the head and she tried to move away – obviously repulsed by his touch?   If not, you can catch the full official recap HERE.   In that episode, we also got to see Kim have a meltdown and confess that she was not ‘feeling’ her marriage and instead of working on that ‘soon to be’ failed marriage, she was visiting a physic to connect with her dead father. Kim told Kourtney Kardashian that she was no longer in love with Kris “It’s hard for me, he’s a good heart, he’s a Christian – everything on paper I want in someone, but for some reason, my heart isn’t connecting.”

Now on to tonight’s episode. Kim finally comes to a conclusion about her marriage, as the gang gets prepared to leave New York City.  It appears that even though Kris and the rest of America knew the marriage was over, Kim just finally stumbled on to that fact herself. You would think that last week when Kris told Kim to spend the “10 minutes you spend with me every week” with his sister was a big enough clue that there was something wrong, but nope, it took Kim another whole episode to clue in. Tomorrow, Kim spills a whole new set of crocodile tears when she appears torn on how she is going to tell Kris that the marriage is over, but Kris is already “so done with her”.

I hardly doubt Kim will miss Kris, after all, she has her daily two hours of hair and makeup, DASH to supervise, a new fashion line to launch and countless other career demands and photo opportunities. Nope, she won’t miss him at all.

Personally, I think Kim needs to quit the act. She knew filming was going to end soon and probably decided to incorporate her failed marriage for sympathy just to make more outrageous amounts of money. I only feel sorry for Kris, he was obviously used and manipulated and like he said in one of the episodes, know one will remember Kim in a few years anyway.  Check out the preview video below and let us know what you think.  Sound out in the comments below!

Make sure to come back tonight at 10PM when we will be live blogging the show with all the details!