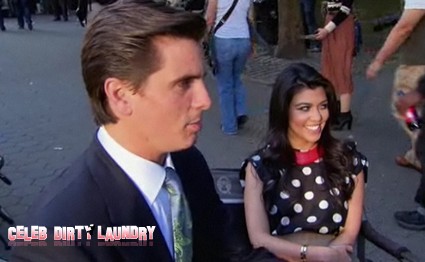 Did you watch Kourtney and Kim Take New York last night? We did and we recapped it for you!  During the show Kim Kardashian‘s cleavage was sticking way out and Kris Humphries asked her if had to be out like that, didn’t you find that when he said that he looked disgusted?  Then when Kim complains that she won’t have time to spend with Kris’ sister who will be visiting, he tells her to take the 10 minutes she spends with him and give it to his sister, wasn’t that rough? But, I think it was exactly what she deserved, didn’t you?

I love the way Scott Disick and Kourtney Kardashsian are getting closer to each other, don’t you? At least they don’t look phony like Kris and Kim.

What did you think of Kim contacting the psychic guru John Edwards? I thought it was stupid, she is such an attention whore, I swear she only comes up with these dumb ideas to have all the attention on her, what do you think?

Didn’t you find Kim was rude when Kris’ sister, Kaela, arrives? Running off to bed and ignoring her was really childish. I thought it was really sad when Kaela tells Kris that she thinks Kim hates her, didn’t you think that was really horrible?

Would you agree the funniest part of the show tonight was when Scott unveiled the portrait?  The unibrow was priceless even though Scott’s feelings were hurt.  He was so excited about the portrait – Kris convinced Kourtney to apologize to Scott and she even agreed to hang the portrait in the house.

Tonight it was so clear that Kris and Kim’s marriage was over, what guy do you know would hit on a waitress at a restaurant if he were happily married?   I felt bad for Kris’ sister, didn’t you think she looked uncomfortable and embarrassed by what he did?

I couldn’t believe that Kris gave advice to Kourtney about her relationship with Scott, what a joke!   Don’t you think he should take his own advice?

I loved the photo shoot on the roof of Kourtney and Scott, it’s really hard not to like those two, don’t you think?  Well, it’s not like we are left with very much on this show, it’s either them or dumb and dumber, oops, Kim and Kris.

How did you enjoy the show?  Sound out in the comments below! This is the first of the two part finale, so it is all over next week.