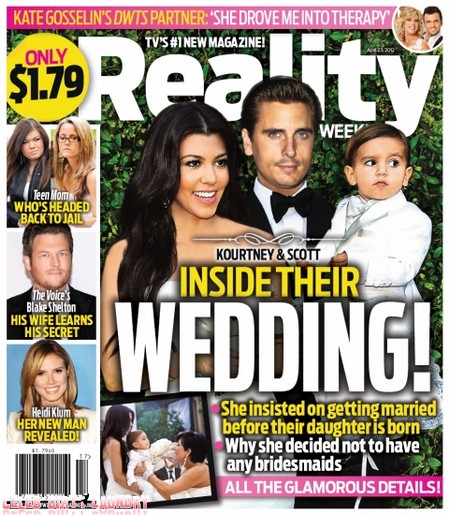 Kourtney Kardashian is putting her foot down with Scott Disick and demanding a wedding before she gives birth.  Kourtney is taking no more chances that party-hardy Scott will run off leaving her a single mom and is insisting that her marry her stat.  All the details of the shotgun wedding will be revealed in this week’s edition of Reality Weekly.

The cover story of the April 23rd edition of Reality TV features the surprise pre-birth wedding of Kourtney and Scott.  I bet nobody will be more surprised that Scott himself!

Stories have been in circulation recently that Scott is looking for his own pad and is partying all over America to avoid his responsibilities with pregnant Kourtney.  Meanwhile corresponding reports suggest that Kourtney is depressed and unhappy with Scott’s refusal to grow up and act like a husband and father.  Of course Scott is not a husband although he is a father to 2 year-old Mason.

Also on the cover we are told that we will learn which Teen Moms are headed back to jail – hopefully all of them!

Also we learn that Blake Shelton of The Voice is in trouble as his wife, Miranda Lambert, as she learns his secret.  What do you suppose the terrible secret could be?  Is he a secret admirer of Chris Brown?

Heidi Klum’s new man will also be revealed in the mag.   Reality Weekly promotes:  When it comes to reality TV, there’s only one place you can get all the breaking news and juicy details you crave: Reality Weekly magazine!

In this week’s issue: Get all the details about Kourtney Kardashian‘s surprise wedding to Scott Disick!  Plus, find out which Teen Moms could be headed back to jail and get the latest on Heidi Klum‘s new man.

Kourtney and Scott married?  Yikes!  What do you think?  Let us know in the comments below.