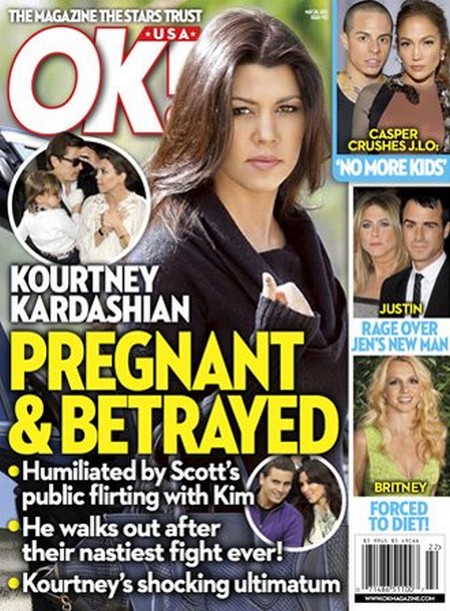 Kourtney Kardashian is devastated after she caught her sister Kim Kardashian and Scott Disick flirting in public.  Scott and Kourtney have had more than their share of issues both recently and in the past.  Now we learn on the cover of the current issue of OK! that Scott has walked out after he and Kourtney had their nastiest fight ever.

Between Scott’s outrageous flirting with Kim and his getting drunk and sick while skipping Kourtney’s  baby shower the woman is at her wit’s end.  It seems that she has had to lay down the law with a shocking ultimatum!

We also learn on this week’s cover that Justin Theroux is not happy about Jennifer Aniston‘s new movie role where she plays opposite Jason Sudeikis.  It seems that Justin is dying of jealousy because he knows just how chummy Jen can get on the set with her co-stars.  After all Justin experienced Jen’s flirtatiousness while they filmed Wanderlust together.

Not only does Justin need to worry about Jen’s obsession with Angelina Jolie and Brad Pitt but now he has Jen’s crush on Jason for his added pleasure.  Don’t be surprised if Justin gets too tired of all Jen’s nonsense and takes the door.  Heidi Bivens won’t mind…

OK!’s cover also mentions Casper Smart‘s rejection of Jennifer Lopez’s ‘gimme babies’ request.  What?  Are we supposed to believe that J.Lo. wants to have more children right now? If Casper were stupid enough to agree to this inanity then he could count on the baby having an extra  grandma – yes we mean J.Lo.  Already she is regularly mistaken for Casper’s mother when they are out in public together.

Sadly OK! exposes the fact that pressure is already being put on the manifestly unstable Britney Spears to lose weight before X Factor starts filming.  This is just what Britney needs… NOT!  She could barely handle her brief appearance at the FOX Up Fronts this week–chewing her nails down to the quick and drawing blood as she recited a memorized few words in her medicated drone.