Kourtney Kardashian Hates Scott Disick But Afraid To Leave Him 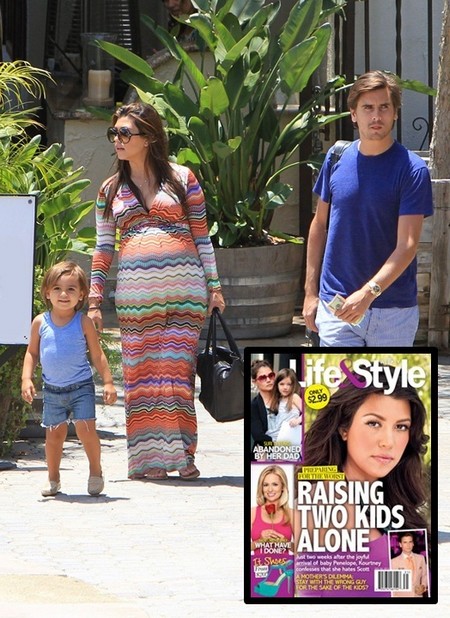 Kourtney Kardashian recently gave birth to a lovely baby girl, Penelope Scotland, but with the new child her woes only increased. While Mason now has a little sister, Kourtney still does not have a husband – and we mean this both literally and figuratively. In fact Kourtney has come to despise Scott Disick, her baby daddy, but is terrified to leave him and deprive her two kids of a papa.

Scott Disick is a douche – that is all there is to it.  He neither wants to be faithful to Kourtney nor to be saddled with two children – but his greed and dependency on the Kardashian fame and fortune keeps him around.  Kourtney was crazy to even have a second child with this bum.  The idea of ‘keeping the family together for the kids’ is a dumb one.  Kids know when their mom hates their dad – and that can’t do them much good.

The cover of this week’s Life&Style has the story ‘Preparing For The Worst – Raising Two Kids Alone’ telling of Kourtney’s fears now that she has given birth and faces the possibility of life without Scott.

According to friend Scott is as bad as ever:  “Scott is totally out of control and a loose cannon, he’s doing whatever he wants to do.”

The source added: “Kourtney doesn’t want Scott’s bad influence on the kids – She’s just sick of him and his bad behavior, and she’s sort of OK raising the kids alone. She’ll be a single mom.”

“Since Kourtney has become a mother, her priorities have changed, and Scott hasn’t shared her love for being a parent.”

Life&Style also promises us a report on Suri Cruise’s feelings of abandonment by her dad, Tom Cruise, due to the separation brought about by Katie Holmes.  Katie will probably do her best to make sure Suri sees her dad as the bad guy here.

Emily Maynard is having second thoughts about her engagement according to the magazine.  We’ll have to read the print edition to get all the details.