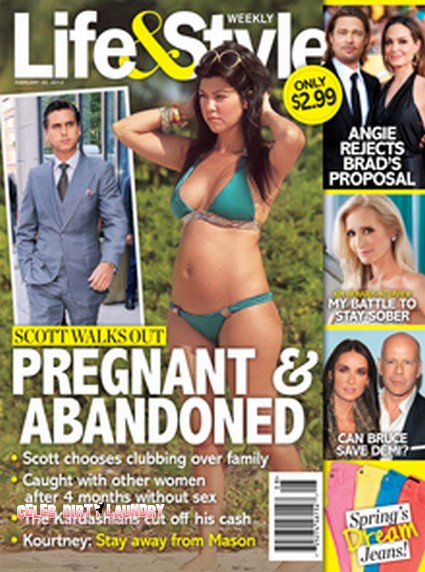 The current issue of Life & Style features the cover story ‘Scott Walks Out – Pregnant & Abandoned.’  The magazine claims that Scott Disick has walked out on his pregnant girlfriend Kourtney Kardashian who is pregnant for the second time by Scott.  We have been hearing rumors that Scott was up to his old tricks and misbehaving.   Kourtney had hoped that a second baby would make Scott grow up but that is not happening. Scott continues to party and enjoy the good life making it pretty clear that the only reason he is around Kourtney is her bank account.

The magazine is claiming that Scott has finally walked out and abandoned Kourtney – that he chose clubbing over his family.  They go on to claim that he and Kourtney have not had sex in four months so he has turned to other women.  Reportedly Kourtney has retaliated by cutting off his cash and telling him to stay away from their son Mason.  No surprise here – everyone has known for a long time what a dog Scott is.  Do you think Kourtney should kick him to the curb?

Meanwhile a friend of Kourtney confirmed to Life & Style that Kourtney is expecting a girl this time.  She said: “”Kourtney was hoping for a girl.  She loves having a boy but thinks having a girl would be perfect so she can dress her up and show her the ropes in life.”  A rep for the couple denies they know the sex of the baby.

Also featured in this issue the magazine claims that Brad Pitt finally proposed to Angelina Jolie and she turned him down.  It has been rumored for some time that Brad and Angie’s children have been pressuring the couple of tie the knot?  What do you think, should Angie and Brad get married?