Kourtney Kardashian Shouts “I Got My Body Back!” on the Cover of Life and Style Weekly (Photo) 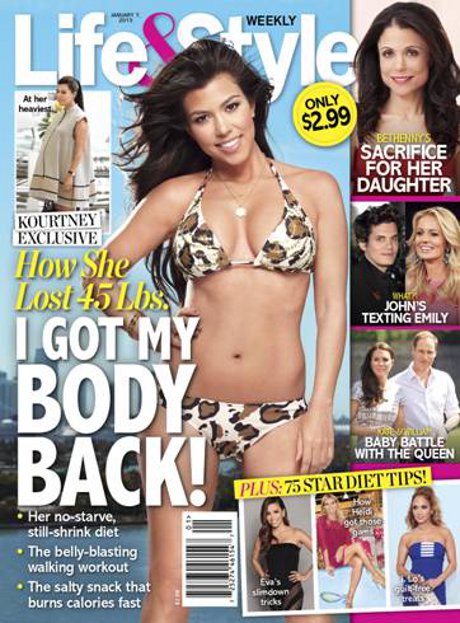 Kourtney Kardashian is what Monique would call a “skinny bitch” and Life and Style has all the different angles to prove it. The eldest Kardashian sister graces the tabloid in a bikini, proud of all the weight she’s lost since the birth of her second child, Penelope. Since PEOPLE magazine isn’t going to bump A list celebs from their front page, Kourtney gave Life & Style pictures and an interview to discuss her 45lb shedding but it was not exactly an exclusive. She’s been on the cover every other week for rumors about Scott Disick cheating on her to an engagement. The latest installment of their saga should naturally include the toll their relationship has taken on the 33 year old’s physique.

The magazine reports that Kourt has been jogging and doing lunges on the Miami Beach sand, intense two-hour Tracy Anderson Method workouts, which keep muscles long, and not bulky.  Exercising and cutting back calories have also been important to the reality star snapping back into shape. Her friends boasted to the magazine that she’s got no body fat on her. Unless of course you count the excess baggage that Scott can be at times, but this is Kourtney’s moment to brag that Megan Fox isn’t the only woman in Hollywood who can look red carpet ready days after the umbilical cord is cut.

The pregnancy theme of the tabloid carries over to Prince William and Kate Middleton. An insider tattles to the rag that the future monarchs are prepared to battle it out with Queen Elizabeth.  It sounds ominous enough, but since the Queen is rocking 3D glasses now, maybe she won’t throw a fit if they end up bestowing their child with a name not approved by her Majesty.

Bethenny Frankel is soon to wage a custody war over her child in other Life and Style scoops.  She’s apparently making a sacrifice for her daughter, Bryn Hoppy. The TV personality may be willing to give her soon to be ex more money than he’s entitled to in order to avoid a protracted fight.

Last but not least, there is John Mayer sharing a portion of the cover as he’s been texting Bachelorette star Emily Maynard. Some may say that Katy Perry has been dating an overgrown child who gets bored easily with the woman in his life. Taylor Swift would agree. She knew he was trouble.