Kourtney Kardashian Throws Scott Disick Out: ‘I Hate Him, I Can’t Trust Him!’ (Photo) 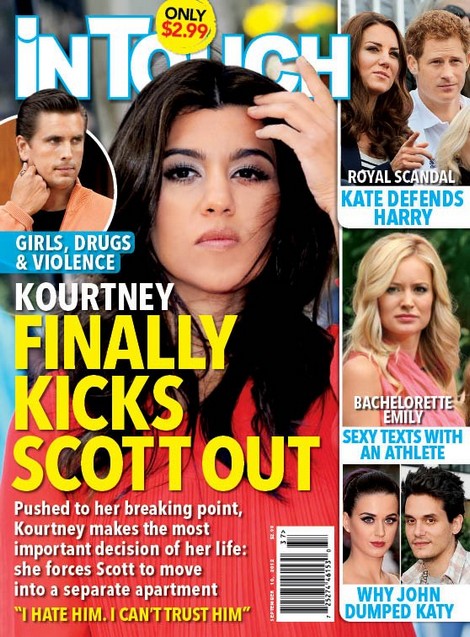 As we reported this week on Celeb Dirty Laundry, Kourtney Kardashian was taken aback when she discovered that Scott Disick was allegedly back on cocaine.  But it seems that Scott just can’t stop playing gangster and is getting involved with some heavy people.  This is not what Kourtney had hoped her life would be like after the birth of daughter Penelope Scotland – a drunk and stoned Scott running with the bad boys while she is left alone and unloved. Just wait until Kris Jenner gets her hands on Scott – he’ll wish he never bought that first eight ball.

Of course what did Kourtney expect?  Scott has never shown any real sign of wanting to be a father and husband – at least not to Kourtney and her children!  So now that Kourtney sees Scott as ‘a man who had fallen among thieves’ (apologies to the late e.e. cummings) she has formally given him the boot and demanded he live in a separate apartment.  Kourtney might be a Kardashian but she still has standards!

This week’s edition of In Touch has a great cover story explaining that after all the drugs, guns and violence Kourtney finally kicks Scott out: Scott Moves Out! Sick of the humiliation he has caused her in the weeks following the birth of their second child, Kourtney Kardashian has insisted that her boyfriend, Scott Disick, stay in separate apartments when they head to Miami next month to film Kourtney & Kim Take Miami.

Also on the cover of In Touch we are not surprised to learn that Tom Cruise is already on the market for a new wife.  And when we say ‘on the market’ we mean that literally.  Tom doesn’t like to waste time meeting and courting women- he prefers to have his Scientology minions set everything up for him.  First the freaks at Co$ vet prospective victims and only then, after a preliminary round of interviews and tests, does Tom check them out.  To see just how well that process works – ask Katie Holmes.

In Touch also tells us about Nick Lachey: “I’m Ready To Never Sleep Again!” says the stud. With the birth of their first child, a son, only weeks away, Nick Lachey and Vanessa Minillo are actually looking forward to the sleepless nights. “I just can’t wait to meet the little guy,” Nick, 38, tells In Touch.

Sounds like a passel of good reading this week – In Touch helps me stay in touch with my inner gossip.