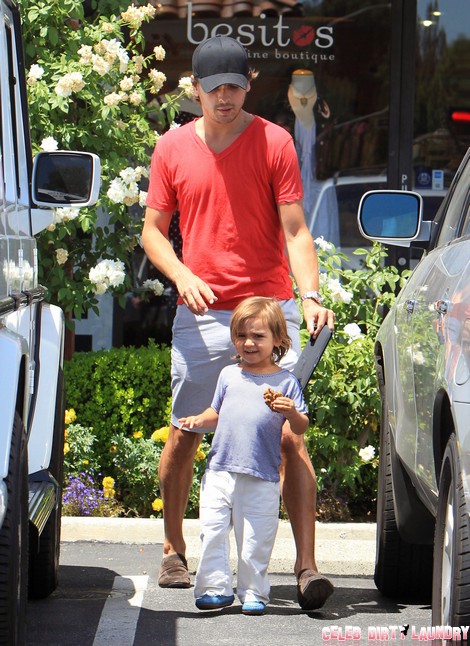 According to reports from multiple sources Scott Disick is engaged in ‘out-of-control drinking and cocaine use,’ In Touch reports.  As a natural consequence of what she perceives as a complete betrayal Kourtney Kardashian won’t let Scott anywhere near their new baby, Penelope Scotland.  Kourtney has kept Scott around throughout the years for reasons that only she understands.  After having Mason Disick with Scott in 2009, Kourtney had 2 years to notice that her baby daddy didn’t want to be a husband and father.  But Scott’s complete failure to mature didn’t stop a desperate and clingy Kourtney from getting pregnant again and continuing the farce.

Now that Scott realizes that he can basically do what he likes and get away with it he has little incentive to sober up and be a responsible father.  Just recently Scott left poor Mason in a hot car alone while he absent-mindedly browsed in a magazine store! According to The National Enquirer Scott moved from irresponsible to potentially criminally negligent in his treatment of his young son: ‘The horrifying incident allegedly took place Aug. 10 in Calabasas, Calif. – where temperatures that day soared as high as 107 degrees!

Scott, 29, had a lunchtime meal with his little boy at a restaurant and then drove to a nearby street-corner newsstand. There, according to the eye­witness, he parked his Mercedes SUV, turned off the ignition and left Mason alone in the vehicle while he went off to browse through magazines.

“He was out of the car for at least five minutes and should have never left his son alone!” an eyewitness told The ENQUIRER. “The car was parked in the hot sun with the boy alone in the back. The car was not running, so the air-conditioner wasn’t on and the windows were rolled up.”’

This is precisely the type of behavior one can expect from people using cocaine and alcohol – they become forgetful and irresponsible.  While jeopardizing Mason’s health and safety by leaving him alone in the car parked in the sun with the windows rolled up and the air-conditioner off does not prove that Scott is back on the crack, it certainly doesn’t prove he isn’t!

In Touch Print Edition, September 3rd reports about Scott: “There’s definitely been a change in him,” says an insider.  “You’re seeing the evil Scott come out.”  A friend agrees: “Things between Kourtney Scott are the worst they’ve ever been.”

In Touch goes on in some detail about the problems facing Kourtney due to Scott’s incessant wild partying – the picture painted is not pretty!  Things have gotten so bad that Kourtney has been forced to ban Scott from being anywhere near the kids unless she is around to supervise.  This is not a sustainable situation for Kourtney – expect to see a major move on her part soon. Kourtney needs to admit failure in her hopeless attempt at turning Scott around.  Then she can throw the bum out once and for all – and move on with her life.  No doubt Kris Jenner can find her daughter a fellow faster than you can ‘famewore.’

Scott left Mason in the car while he grabbed a copy of Sport Boat magazine from a newsstand.